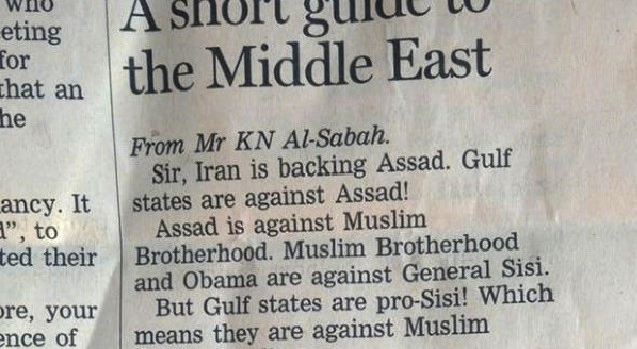 If you’re having trouble unraveling the situation in the middle east in your mind, you are certainly not alone. I’ve read quite a bit on the subject and I’m still confused. It looks like the Western world will soon be intervening, in response to (as yet unproven) claims that the Syrian government launched a devastating chemical attack on civilians.

The UK are currently seeking UN backing to enter the fray. Which will leave hardly any Middle-Eastern countries that the UK and US aren’t at war with, unfortunately the only effect this will have is creating more corpses. Luckily a helpful certain Mr K.N Al-Sabah has written to the Financial Times in a bid to explain the whole thing;

Doesn’t really get more simple than that does it!

If, like me, the whole situation makes your head hurt, the only real option is to bury your head in other, more fatuous news (OMG Miley Cyrus acted like a whore at some award ceremony, I dunno) because this one is not going to iron itself out anytime soon. I could offer a simple, yet impossible resolution;

Obviously it’s never as simple as that, why would people ever be logical and non-violent? It would only solve every problem humanity has ever faced.

Pizza Hut Middle East Knows How To Make A Pizza