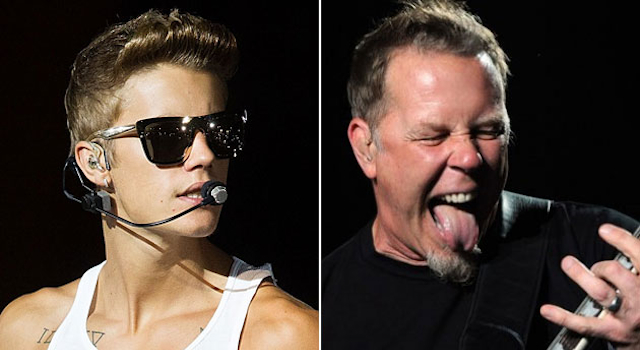 Metallica have joined Justin Bieber’s army of Beliebers. This isn’t a joke – find out what they had to say here.

In news that is bound to depress everyone all over the world ever, Metallica have admitted that they’re Beliebers in perhaps the most unnecessary interview in history.

Q magazine were talking to Metallica about whether they approved of Bieber recently announcing that ‘Fade To Black’ and ‘One’ were his jams, even posting up a video of him covering Fade To Black. When asked about whether they were Beliebers, the following members of Metallica had the following bizarre reactions the question. Bizarre because you would expect anyone in their right mind to immediately answer ‘no fucking way’ and punch you in the face, especially if they’re badass metal dudes like Metallica.

James Hetfield: ‘Are we Beliebers? Yes’

Rob Trujillo: ‘As long as he stays out of trouble, I’ll be a Belieber.’

Lars Ullrich: ‘Is it possible to have respect for him without being a Belieber? I think the kid’s really talented and obviously to go through what he’s going through at that early age must be a mind fuck. So the fact that he still goes out there and does it, I admire that and I think he’s super talented, so I guess I am kind of a Belieber. If he likes ‘One’, and Liam Gallagher likes him, OK, there you go.’

The world burns. It’s interesting that the lamest member of the band Kirk Hammett – who you would probably expect to be a Belieber – stayed quiet on the subject. What exactly does that mean?