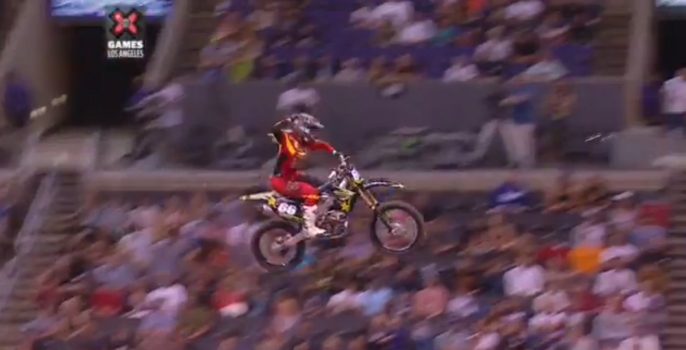 Nobody likes a show off.  Those kids in school who were A* students, captains of the football team, got all the fittest birds and were generally great at anything they turned their hand at. Those people who no matter what happens in their life, always manage to land on their feet and never struggle with any aspect of their life. Now most of us aren’t one of those people and when we see someone at the top of their game fail we celebrate it more than one of our own victories.

Cue 18 year old American female motocross rider Meghan Rutledge who was competing in the Summer X Games in Los Angeles at the weekend. Meghan was leading the race on the final lap, with only one jump and one bend to go surely she had won the race? That’s exactly what she thought as she victoriously fist pumped flying over the last jump which left her unbalanced and unable to land the bike, leaving her in a huge pile of over-inflated ego on the deck.

Check out the epic fail below, I will let you make up your own women driver jokes…..

ESPN In Biggest Subtitle Fail Ever

Guy Nearly Hangs Himself On Electric Cable At Tough Mudder

Man Gets Drunk And Wakes Up Having Lost His Manhood