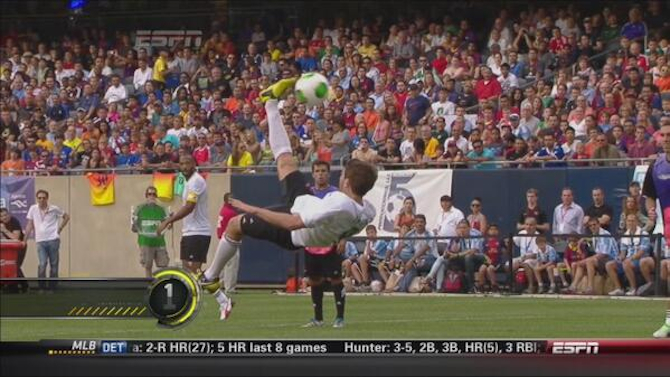 if you’re a nobody from Northwestern University, how do you upstage Lionel Messi and Thierry Henry in a charity match? By scoring one of the sweetest bicycle kicks ever.

This is one of the coolest football stories of all time and kinda like something you think might happen in a dumb football movie like Goal The Movie or Escape To Victory or something like that. There’s a bit of background to it though so you’ll have to read a bit but it’s a good story, trust me.

So basically for some reason Lionel Messi decided to organise a bunch of charity matches in America (I dunno why he would organise them in America, surely they would be more popular in every other country in the world?) where it would be ‘Lionel Messi and Friends’ Vs ‘The Rest of The World.’ Unfortunately for Messi, his organisational skills took a hit in this tournament when one of the charity matches got cancelled and a bunch of people who had said they were going to play in them – like Cesc Fabregas, David Luiz and Reobert Lewandowski – couldn’t be bothered to turn up and so the organisers of the game (Messi?) had to fill the two teams with some local players from the Northwestern University which was pretty local to Chicago where the game was being played.

This was a bit of a cop out for people that had actually bothered to pay for tickets. I mean sure, you did get some superstars show up and play like Thierry Henry, Florent Malouda (who was probably just happy to get a game after being stuck in the Chelsea wilderness for the last year) and um Carlos Bocanegra, but when loads of people who you thought were gonna play don’t bother showing up you’re probably gonna be a bit pissed off right?

Probably, but then some dude called Matt Eliason scored one of the sweetest bicycle kicks of all time and it became an instant hit all over the world. It happened in the 29th minute and as Matt Eliason makes a forward run into the box and Thierry Henry dinks a ball into him. Sure, nobody was tracking Eliason but he still shows great skill and composure to chest the ball up in the air and then fire a really sweet bicycle kick into the back of the net. To make it even better Florent Malouda looks really pumped for it and runs over and hugs him afterwards. Eliason also gets congratulated by Alex Song and Thierry Henry for that. Anyone who has ever played football at any level has gotta appreciate how amazing that probably felt.

Eliason himself is a financial analyst who recently graduated from Northwestern and is also their all time highest scorer. Hopefully someone in the MLS will take a punt on him now as obviously his goalscoring record speaks for itself and this goal is completely killer. What a great ending to the story that would be.

You can see his killer bicycle kick below and I also included another video of the full highlights of the match. It ended 9-6 to Messi and friends with Messi getting 4, but it’s also notable because Thierry Henry did that stupid penalty trick he tried to do with Robert Pires ages ago but screwed up and it works this time. Wow.

Check out the highlights below: