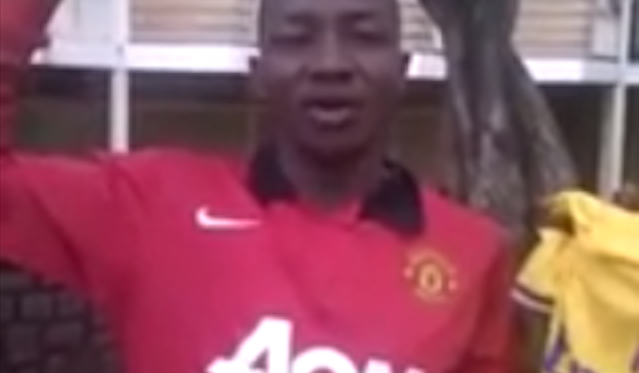 I was only joking when I mentioned this yesterday, but someone has filmed an official ceremony of a Man United fan switching their allegiance to Arsenal.

I said yesterday in the article I wrote about a Manchester United fan committing suicide following their second successive home defeat that there were a variety of ways of typical glory fans dealing with their current situation, and one of them was to switch over to becoming an Arsenal fan.

I was only joking about that, but no sooner have I said it than some joker has uploaded a YouTube video of themselves onto the internet, publicly changing their Manchester United shirt for an Arsenal one. I’d like to say I was surprised, but given the fickle nature of their fans, I’ve got to say that I’m not actually surprised at all.

Of course, it could be very likely that this is a pisstake or a dare or a lost bet or something, but I prefer to think that somewhere this actually happened and it was real, because it would just epitomises everything I’ve ever felt about glory hunting Manchester United fans.

It’s really funny to read the comments on the YouTube video too if you get a minute, because it’s all stuff like ‘he’s a plastic fan, you Arsenal fans can have him’ and replies like ‘we don’t want the likes of this guy supporting the mighty Arsenal, when we’re in a tough position again he’s just going to jump ship’ blah blah blah, awah wah wah.

Awesome trolling or actually real? Let us know what you think.