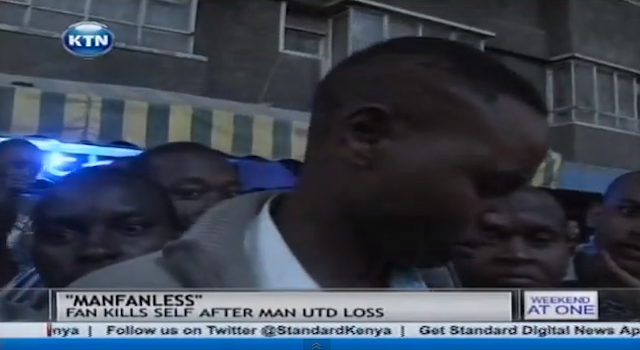 It must really suck to be a Manchester United fan right now, but however bad you’re feeling it’s not as bad as this dude.

It must be really tough being a Manchester United fan right now, as you’re used to supporting the best team in the world but now they’re pretty much dog shit and you probably don’t know how to deal with it as the only reason you started supporting Manchester United in the first place is because you’re a glory hunter and they’ve usually been there or thereabouts your whole life. What’s happening now is completely new territory for you.

However you’re dealing with it though (stopping going to your local pub to watch games because it’s too embarrassing, saying you’re more into the Bundesliga since ITV4 started showing weekly highlights shows, switching teams to support Arsenal etc) you definitely aren’t taking it as badly as Kenyan Manchester United fan John Jimmy Macharia, who jumped to his death from a seven story building following their home loss to Newcastle at the weekend.

According to the police chief of Nairobi County – a guy called Benson Kibue – Macharia explained to his friends that he could not bear to see his team lose twice in a row at home and then immediately jumped out of the window to his death. That’s some intense devotion to the Red Devils right there.

Benson also offered the following explanation: ‘All witness accounts suggest he committed suicide because the team lost but officers are still talking to those who were with him as part of the investigations into the incident. It is not the first time we are losing a young man because of the football in England, which is far away from us. They need to know that is just a game’. Amen dude because it really is crazy that people are killing themselves because Manchester United are doing shit. David Moyes really needs to sort it out ASAP otherwise we could be looking at a population problem in Africa.