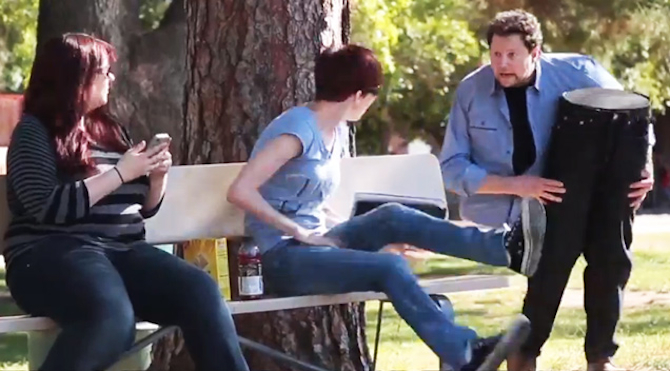 If you saw a man cut in half carrying his legs around, would you freak out anywhere near as much as these guys?

This video has been online for almost a month now but I hadn’t seen anything about it on the internet – despite it having almost 2 million views – until a couple of days ago so I figured it was worth featuring on Sick Chirpse because it is absolute comedy gold and some guy tweeted it to us yesterday who seemed legit.

The basic premise is that somehow this magician dude called Andy Gross has managed to create this awesome illusion which makes him look like he’s cut in half and is literally carrying his legs around with him while his torso floats suspended in mid air. I don’t know how he did that but that isn’t really the point of the video. The point is that he’s decided to use this prank to totally scare the crap out of a bunch of people by walking around the park and other every day places like he’s totally normal.

It’s a great idea because it totally works and almost everyone gets completely freaked out about it and it’s hilarious and well, his video has 2 million views so he’s killed it.

The Ring Prank Scares The Shit Out Of Girl

This Invisible Driver Drive Thru Prank Is Awesome