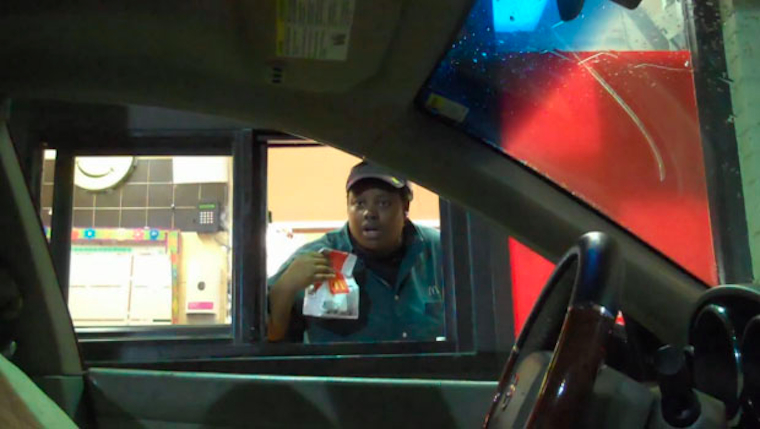 Drive thru workers probably have the worst jobs in the world but sometimes they get awesome pranks like this played on them which might make their job slightly more fun.

This only went up a couple of days ago and already has like 3 million views on YouTube so is pretty clearly heavily viral, but I haven’t seen it talked about anywhere so I guess there’s a good chance you might have missed it and it’s really, really hilarious so it’s definitely worth posting up here on Sick Chirpse. Basically some dude called Rahat The Magician Prankster (what is it with people with completely awesome names featuring in my posts this week – check out the chicken brain in the KFC story or the guy getting so drunk on his flight he had to be taped to his seat story if you don’t believe me)  thought it would be a good idea to prank drive thru operators – operators?? Is that what they’re called? Maybe workers? – with a car rolling up with nobody driving it.

Sounds like a cool prank right? But how was he going to do that? It’s not like remote controlled full size cars exist yet right? Or do they? If they do they’re probably really expensive anyhow and probably kind of hard to operate and Rahat The Magician Prankster came up with a better solution anyway: he made a costume that looked exactly like a car seat. Ingenious right? Why had nobody thought of that before? When you see the car with Rahat The Magician Prankster using his costume it does look slightly suspicious because the driver’s seat looks a bit further forward than usual, but this is probably just because we know that he’s using the costume in it. To anyone else it probably just looks like an empty car.

Certainly the drive thru workers – think it should be workers not operators – are none the wiser and most of them freak the hell out as this ghost car drives up to the window and there are loads of great reactions such as ‘instagram dat joint,’ ‘GURL’ and ‘am i trippin son?’ or my personal favourite when the weird looking Mexican guy is on his own and just constantly looks back and forth from the car to inside the window in disbelief. It’s a real hoot and no surprise that so many people are digging it already.