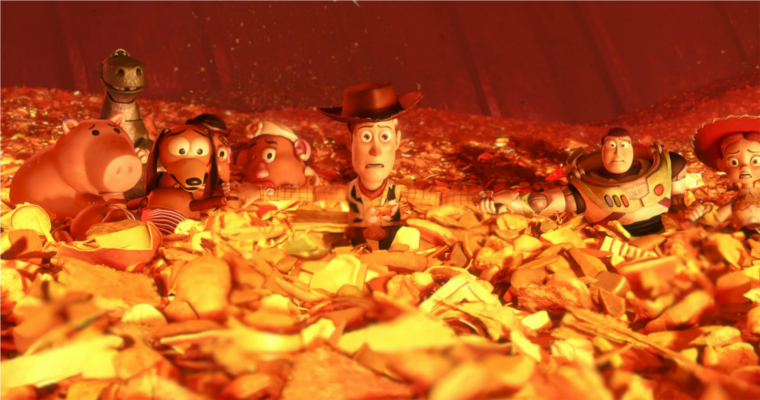 A couple of kids decided that Toy Story 3 had too nice an ending for their mum, who had never seen the film. So the little trolls edited the film before showing it to mum, leaving her devastated at the new ending. Hilarious.

Kids can be cruel. Me and my sister once convinced our little brother that our parents didn’t want him anymore, packed him up with a fold-out tent and a few pairs of socks, and sent him off on his bike to find a new home. Luckily someone thought it was strange to see a 5 year old kid on a bike a good couple of miles out of our town, so she picked him up and brought him home. I don’t think our parents even noticed he was gone.

That being said, there is literally no justification for what these kids do to their mum. Having acquired some basic video editing skills, they set about changing the ending of Toy Story 3, which, on the face of it, doesn’t seem like too harsh a prank to pull – although I’m sure there should be some kind of law against defiling the seminal movie series of our generation.

The real genius of this prank is where they cut to the ending. If you’ve seen Toy Story 3 – that’s pretty much everyone right? – you’ll know the scene I’m talking about. The one where the toys are all about to meet their fiery death, with no possible means of escape. You remember the look of “this is it” they give each other and that feeling of “this can’t end like this” you got and “oh my God they’re all going to die! How could you break our hearts like this Pixar?” Yeah, that one.

So Mum, who hasn’t seen the film before, gets the premier screening of “Toy Story 3 – Your Kids Hate You Cut” while her troll children sit behind and film her reaction. She’s inevitably outraged at what she thinks is the real ending and is probably never going to get over the disappointment. Oh, and that outro music, killer.

The prank doesn’t end there though. Next day the kids film their Mum as she sits at the dinner table discussing the film with Dad and friend. “What did you think of Toy Story 3?” they ask dad. He loved it, of course, and mum can’t understand why. They’re all laughing which confuses mum even more. At this point mum must think shes raised a family of heartless, toy hating bastards. She has, and she’s become the victim of their cruel, hilarious prank.

The Brazilian dude that pranked his kid with a fake Kinder egg should watch out, seems like kids are pretty good at dealing deep psychological damage to even the kindest of parents. Here’s the video for those of you (probably everyone) that couldn’t be arsed reading this whole thing: