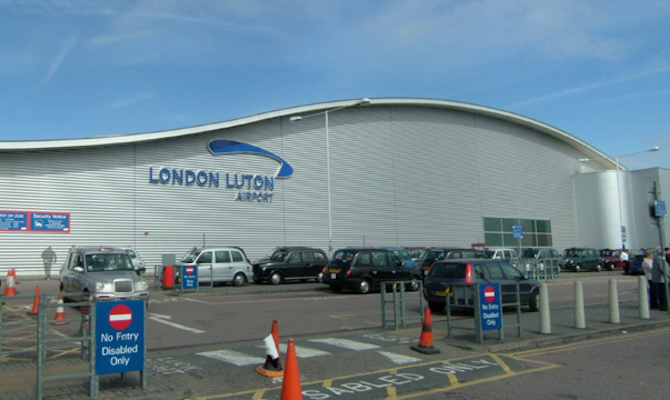 It’s not a bad idea to try and promote your business through social media, but it’s probably a bad idea to put up a picture of a plane crash with an inappropriate comment if you’re trying to promote an airport. 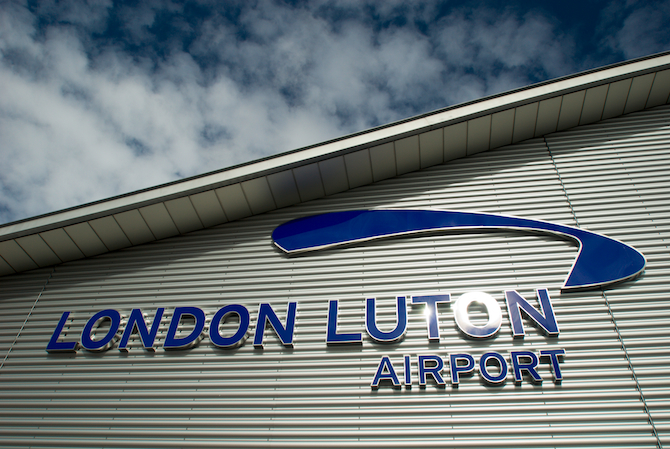 Luton airport is probably one of the shittest airports I have ever been  to – it’s real small and crap, it’s really far away from London but close enough to still be classified as a London airport, it costs loads to get there from London and my flight got delayed when I went there – so it makes sense that they would also have one of the shittest social media policies in history.

Actually that’s probably a bit harsh but this is definitely one of the biggest faux pas I have seen in recent history and whoever thought it was a good idea deserves to be tortured or at least fired or something because it really is stupid to think that it would be a good idea in any capacity to post a picture of a plane crash in which some 6 year old kid DIED on your airport’s Facebook page. Check out what numb nuts did below: 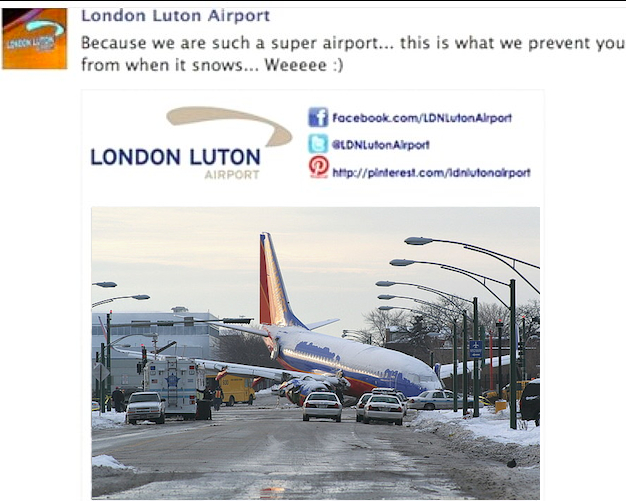 I mean sure, he’s (or she sure but for the sake of this article I’m going to assume it’s a man and write it as such, also I think it’s more realistic that a man would so something so insensitive and asshole-ish)  promoting the fact that their airport is so good that it WON’T lead to a plane crash in the snow, but the very fact that they’re featuring a plane crash on their social media site is only going to make those viewing the page associate their company with a plane crash. Trust me on this, I have to work with a lot of advertisers.

What’s probably worse though is that this plane crash was actually a fairly big disaster over in America (in Chicago to be precise) and it involved the plane sliding off the runway into oncoming traffic, killing a 6 year old boy named Joshua Woods and injuring about 20 more people. Although only one person died it was still seen as a massive disaster over there and was big news at the time, so you can’t really use an image like this without expecting there to be huge repercussions. I guess it’s like Marilyn Manson’s Fight Song – ‘the death of one is a tragedy, the death of millions is just a statistic.’ Or not really because that’s probably one of the stupidest lyrics of all time if you’re over 14.

â˜› More Stupid Lyrics: Guy Tries To Pick Up Chicks With Nothing But Taylor Swift Lyrics

Of course, Facebook users with nothing better to do at 10am on a Thursday (re: unemployed trolls and single mom trolls) completely began to rip into the post saying how it was completely inappropriate and ‘appauling’ (their spelling not mine obv) and after an hour it got taken down and Luton airport was forced to issue the following grovelling apology:

‘London Luton Airport apologises unreservedly for the post on Facebook, which was wholly unacceptable and insensitive. We have Social Media guidelines that clearly outline what is acceptable, however in this instance a new, over-enthusiastic member of our support team made an honest but misguided mistake and clearly stepped over the line. We apologise for any offence caused. Further steps have been taken to guarantee this never happens again.’

There are so many things that are wrong with that statement it’s untrue. I mean for a start if they have social media guidelines then why the hell didn’t this new member of staff bother to read them? If there was a new member of staff then why the hell didn’t anyone monitor them from doing anything stupid in their first few days, and why the hell were they given the keys to the kingdom and allowed to make Facebook posts anyway if they were a new employee?

And seriously, shouldn’t they at least be checking the copy? I know posting a picture of a plane crash is pretty offensive but to be honest I find it almost as offensive that a legitimate big time company like an airport thought that it was a good idea to include ‘Weeee :)’ in official correspondence.

â˜› Maybe They Should Have Read This: Social Media Consultants Can Suck My Balls

But yeah the whole debacle has just made me hate Luton airport even more, despite the fact that it’s pretty LOLZ. I’ll probably be travelling from Gatwick from now on or something.