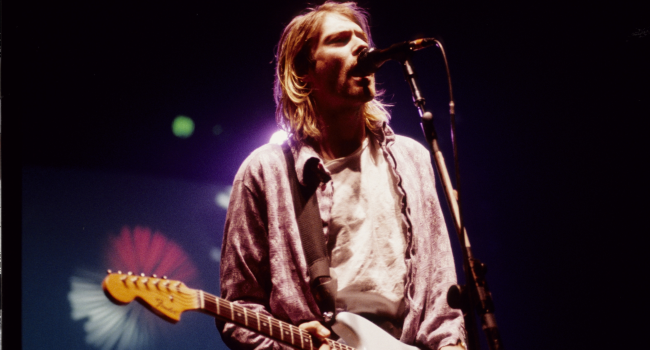 An obscure video has emerged via YouTube of the rock icon and his bandmates makin’ babies and it’s every bit as freaky as you could imagine.

Kurt Cobain is, annoyingly, still dead. But his music lives on.

And his music really does live on because almost 20 years after Kurt decided that being alive was too much hassle, Nirvana’s third and final studio album In Utero is getting a deluxe anniversary re-release in September of this year.

Presumably it includes “alternate” (read: inferior) versions of existing songs, snappy packaging, high-res photographs and other crap designed to fool you into thinking this is something new and exciting and somehow worthy of the extra money you’re being asked to pay.

Did Kurt Spin In His Grave Other This? Paul McCartney x Nirvana

But of particular interest is a bizarre and rarely-seen advert, recently posted on the band’s YouTube, which was used to flog the album back in 1993. It stars none other than surrealist US funny person Bobcat Goldthwait, whose funny-voiced comedy stylings you may remember from Police Academy 4.

We’d be spoiling it for you if we said too much before you had to chance to watch it, suffice to say the acclaimed grunge trio discover the joy of parenthood;

The ad is surprisingly light-hearted, considering how bleak some of the album’s lyrics were. We particularly likes Dave Grohl’s ‘labour pains’ face at 0:23.

And lastly, because it’s still fucking hilarious, here’s Kurt and co. taking the piss on Top Of The Pops;