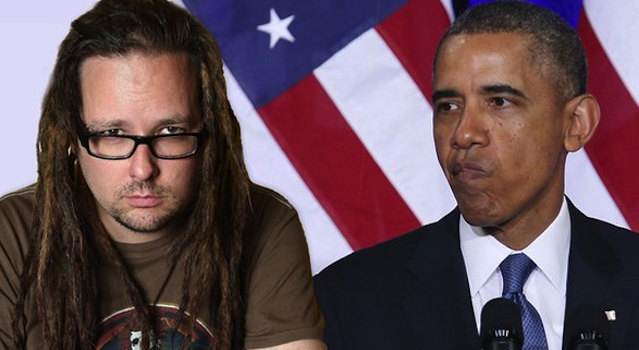 Remember last summer when everyone was talking about Miley Cyrus twerking at the VMAs?

Like literally everyone – it was the most tweeted about event of 2013 – was talking about this so I would be surprised if you didn’t remember. But did you know that at the same time Barack Obama was passing the National Defence Authorization Act 2013 (used a z because it’s American), which apparently lets him imprison anyone for as long as he wants without any charge?

Probably not right, and Korn frontman Jonathan Davies believes that this is because Barack Obama is manipulating celebrities and media coverage of their lives so that people are missing the real shit that is actually going down in terms of political change. Here’s what he had to say about it: ‘I think that our government uses those people to distract from what’s really going on…the thing with Miley Cyrus at the VMAs, when that went down, I think Barack Obama passed a law that he is basically a dictator, he can imprison whoever he wants, he doesn’t have to charge them, he can hold them as long as he wants.’

Wow. That’s a big conspiracy claim but hey it could be right because more people do talk about Miley Cyrus than the National Defence Authorization Act. Of course, this could just be because most people love seeing celebrities act stupid/fail/be dickheads because it’s really funny and gives them something to bitch about and generally find politics boring until it affects them, but I’m not sure if this is down to brainwashing or just the inherent characteristics of the subject matter of each.

Probably the latter but hey, maybe Korn are onto something. Given that Jonathan Davies once claimed that Korn created dubstep though, I’m not so sure as he has a track record of making outrageous claims with absolutely no justification.

You can see Jonathan Davies giving this statement to TMZ (who apparently consider him a celebrity?!?!) and Korn’s new music video – which subversively deals with this subject – below: