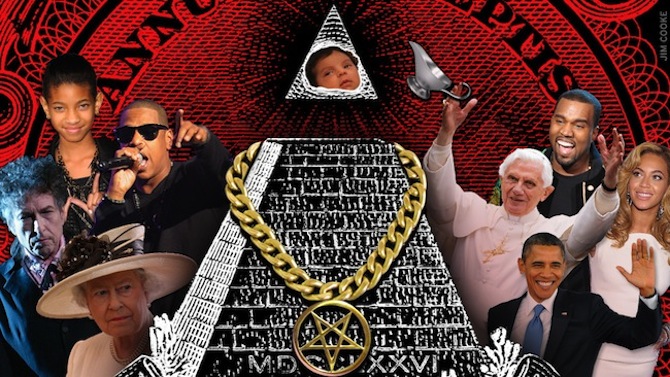 Time for another round of Conspiracy Theorist Vs Rational Person – this time dealing with the umbrella of all conspiracy theories – the Illuminati.

The Illuminati is the umbrella of all conspiracy theories. They were a group that we know for a fact existed in the 18th century. They were largely anti-establishment, largely anti-religion and supported free thought, women’s education and gender equality. Somehow along the way all that they stood for went to pot, thanks to the idea among conspiracy theorists that the The Illuminati are actually still lurking in the shadows today, only this time they are masterminding all the major evil acts of the world, pulling the strings of governments around the globe and staging false flag attacks like 9/11 and the Boston Bombings.

I decided to look into the Illuminati and see if there is actually anything to worry about, again in the form of Conspiracy Theorist Vs Rational Person. 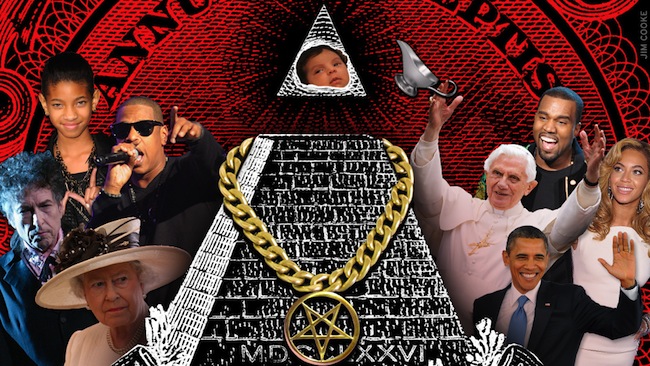 CONSPIRACY THEORIST SAYS: The Illuminati is an evil group that puppeteers the prominent and influential people of the world, from Barack Obama to Lady GaGa to Simon Cowell to The Pope.

RATIONAL PERSON SAYS: The truth is the Illuminati were an 18th century group of Bavarian humanists and free thinkers. The modern day fascination that they are a global group of satanists was popularised by fiction books such as the Illuminatus and the Da Vinci Code — in which they are cast as villains. Modern day beliefs in the Illuminati are the product of the ultimate paranoid mind, as they seem to include not only governments and corporations but Hollywood actors and musicians as well.

CONSPIRACY THEORIST: The illuminati hides subliminal messages in TV and music, designed to condition you to think and behave in a way that means you won’t get in the way of their evil plans for the future.

RATIONAL PERSON: So in other words, every ideological difference you think exists between different political parties, rival companies and different TV shows is actually fake. In reality, they are all meeting behind the scenes, controlling everything and making it appear that they are not all working towards the same common goal: assisting the Illuminati in its world takeover. They are having meetings in top five star hotels where they decide that New York or London needs a terrorist attack this year while using their sinister connections in music to plant secret messages into Justin Beiber songs. Ask yourself, does that actually make any sense?

CONSPIRACY THEORIST: The Bilderbergs/Rockerfellers/Trilateral Commission/Illuminati rule the world and want a One World Government/World Domination.

RATIONAL PERSON: The Trilateral Commission was a club started by David Rockefeller in the early 70’s to foster closer relations between America, Europe and Japan, as a means for rich internationals (about 100 of them) to talk business, politics and women. Think of it as a millionaire boys’ club. The Bilderbergs — as highlighted in the book ‘Them’ by Jon Ronson — are a bunch of influential guys from America and Europe who have been meeting once a year in fancy hotels since 1954. There are little more than 100 members and prominent politicians are among them. They are called the ‘Bilderbergs’ because the Bilderberg was the first hotel they all stayed in. Had all the rooms been fully booked that night, they could have easily been called the ‘Travelodges’! These people are quite secretive about their meetings. You and I have perhaps also attended meetings or parties that were secretive.

CONSPIRACY THEORIST: Why are they keeping their meetings secret? They are definitely planning something to do with a New World Order.

RATIONAL PERSON: It seems as though conspiracy theorists are trying to fill in the information void — if they won’t tell us why they’re meeting, they must be planning a worldwide takeover, right? Well, they have had decade upon decade, centuries if we are to believe some theorists, to put these plans into effect. So then why does Europe hate America? Why is the Middle East more fucked than it ever was? Why does China care about no one but itself? Why is North Korea still run by a crazy sadist? Why are there thousands of cultural battles both physical and verbal taking place in every country each day? Seems like this one-world government thing isn’t working out. Or maybe, it is all a product of your mind!

CONSPIRACY THEORIST: What about the American dollar bill? That eye in the pyramid is the All-seeing eye of Masonic ritual. Either that or the Eye of Satan!

RATIONAL PERSON: Free masons didn’t start using the All seeing eye as a symbol of their society until 1797, years after the image was chosen for the back of the dollar bill. The “Eye of Providence” had existed long before the Free Masons started and long before the Revolutionary War. It was just an image that, coincidentally, was adopted by more than one community in need of a powerful symbol.

RATIONAL PERSON: And if it rains, the Illuminati wants a flood. If it doesn’t, they must want a drought. Ah, it all makes sense now.

So there we go again. It seems like this scaremongering over a modern day Illuminati is simply that – which is massively ironic if you think about it. If you buy into this sort of thing the best thing you can do is look into the reasons why you are susceptible to believing outlandish conspiracy theories, and begin looking at things with a rational mind, as dull as the truth may be.

This Is Why Conspiracy Theories Always Bomb

The Montauk Monster Of Plum Island