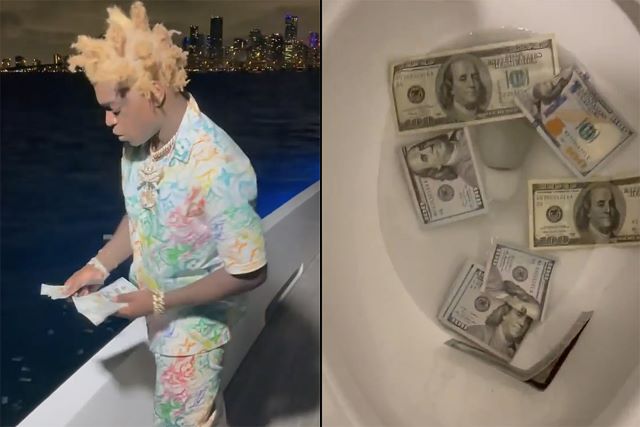 Anyone who’s followed our stories on Florida rapper Kodak Black knows that he’s basically the dumbest person alive, but he might’ve outdone himself this week by literally flushing money down the toilet and then tossing $100,000 in cash into the ocean.

Wow, what a hero. Obviously the internet is extremely unhappy about this as there’s no shortage of causes out there that could really use the money he’s flushing into the sewers and dumping into the middle of the ocean. Yeah OK you could say it’s his money and he can do what he wants with it, but what’s his point exactly? To wind people up? To counteract deflation by taking so many bills out of circulation? Well he’s definitely achieved one of those things.

It’s crazy this lad got rich enough to even be able to do something like this in the first place. If he keeps it up I guess we can expect the ‘Kodak Black gone broke’ story in about 5 years. But not before the next video in which he literally eats $100k on camera. Come on Kodak, don’t stop now.

For the time Kodak Black was arrested for ‘accidentally’ following his GPS across the border with guns & weed, click HERE. Easy mistake.