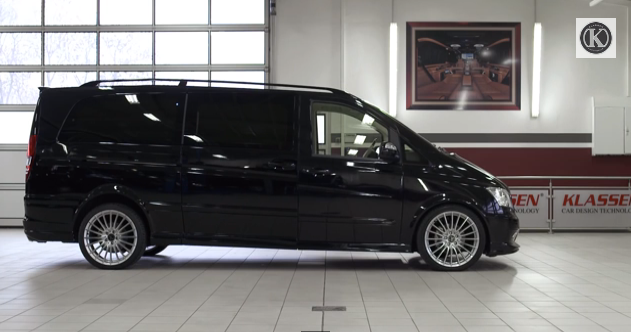 Seriously, the interior is mind-blowing.

Klassen is a German based company that specialises in making luxury cars and thy’ve made easily the most luxurious car I could ever have imagined with the Vlano VIP Limousine Business Van. Like I said in the blurb, it looks like a goddamn private jet inse, although it isn’t as cool as those new windowless private jets.

It’s spacious – with completely sick looking comfortable chair which are probably way comfier than any of the chairs in my house – and has so  many sick features, like tables, lights, a bar, a coffee machine and a safe where you can store a wad of bills or cigars like this dude or maybe if you’re more like me then your weed and coke. For some reason it also has a CD player which isn’t very forward thinking but maybe they were going for the retro look or something.

Either way, the van is completely pimping. They’ve also made the video as epic as possible which only serves to accentuate just how badass the whole thing is. Too bad that they probably cost a bomb and you’d have to probably live in the most expensive apartment in the world to even come close to picking one up eh?