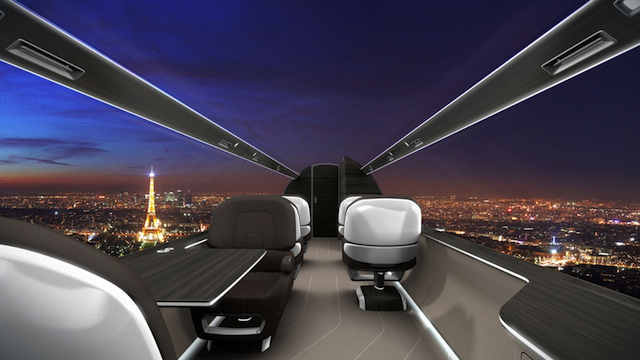 Taking flying to the next level.

Following on from the Airbus windowless plane from back in 2012, Paris based Technicon design recently won an award for their IXION windowless jet concept, which looks out of this world awesome.

The idea is not to build the plane out of see through glass – get real – but instead to capture the scenery surrounding the plane with cameras mounted on its exterior and then project this onto the cabin walls and ceiling. Unfortunately they’re not including the floor on this one, so anyone who was bricking it about that can breathe easy again. The displays are powered by solar panels, making the whole thing pretty much perfect.

Even better, the plane doesn’t necessarily need to project what’s outside it so if it’s cloudy and boring they could instead place a video of the Grand Canyon, a rainforest or even underwater or the moon to make your journey more interesting.

The ethos of the project is simple, to challenge current thinking, and propose something a little different, but not just a fantasy. It has to be credible and relevant, yet provoke discussion.

Check out a video explaining a little bit more about them below. Hopefully they’ll be the norm in our lifetime with companies like Technicon and Airbus amongst others working on them  – but if this does happen I hope that seeing stuff projected on the walls and ceiling of a plane never becomes boring or the norm.