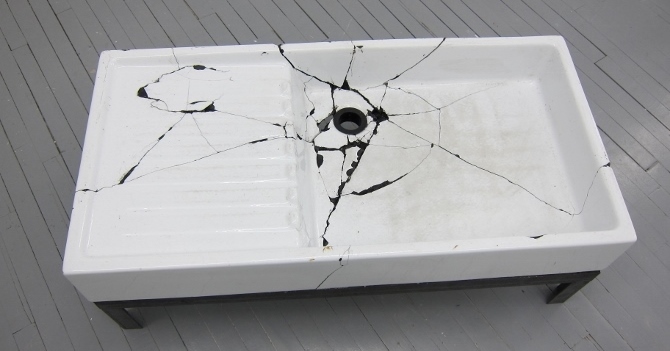 This guy think he’s a tough guy and decides to destroy a sink at a house party. But the sink gets its revenge and tears the guy’s hand open.

We’ve all been to house parties and we all know how mental they can get. A few years back, I had a house party and everyone was trashed and we were only like 18 or something so we thought we’d drunk loads but it was piss compared to today’s watering-down routines but, nonetheless, we were smashed and by 11pm things had become a hazy blur. The music was pumping, my cats were sleeping, people had stopped flushing the toilet and had emptied my freezer, there was broken glass everywhere and one of my mates had gone upstairs – on his own – to presumably enjoy a drunken poo in the cleaner bathroom.

â˜› Poo Like The Gods: How To Do The Perfect Poo

But, after he’d been in the bathroom for something like half an hour I decided enough was enough and went upstairs to check on him. The door was locked but I could hear water running. I thought it was weird and asked what he was doing and replied with ‘having a bath’. Yeah, my house parties were wild. I left him to it, but then realised that nobody had been able to have a bath for a week or so because there was a crack in the ceiling directly below the bath and any pressure on the crack would tear it and split the ceiling even more. I shit myself and told him to get out but it was too late. The fat bastard’s weight had pressured the ceiling and suddenly there was a massive ripping noise and the ceiling came down with the bath, and the fat bastard, hanging halfway out. Wild. My parents went nuts when they came back from their shagging weekend away. It’s probably a good thing I don’t live with them anymore.

So, yeah, that’s one of my stories. But this guy has a story about a house party, too. When he gets out of hospital, anyway. I don’t know why but it’s really easy to hate him. Actually, I do know why. It’s because he’s destroying someone else’s property, which they’d have to fork out money to repair, and he looks like the kind of guy who’d lace your missus’ drink with Rohypnol because she didn’t want his offer of a quick finger in the lane. He’s also part of a really cringey clubbing group called ‘Erasmus Crazy Tour‘. Anything that’s labelled crazy is never going to be crazy, we all know that.

Anyway, this idiot decides to smash up a sink with one of his inbred goblin friends but when he decides to put all of his weight on the sink, it collapses off the wall but his hand gets caught in the ceramic and basically tears his hand open. His face when he gets up is priceless and shocked, like as if he’s just seen a unicorn’s cock, but keep an eye out for the blood spurting all over the wall like some magic horse piss.

Sink Wars: Revenge of the Sink.