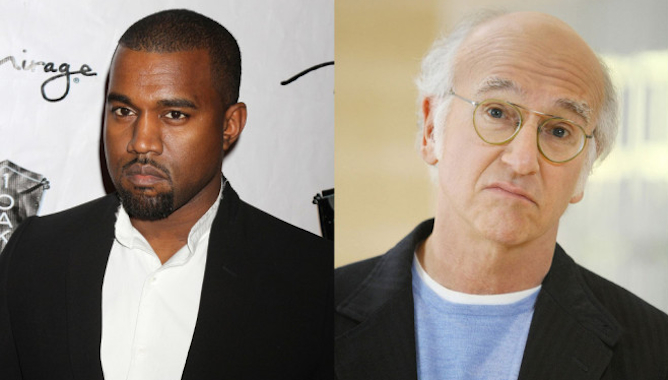 Here’s a couple of scenes from an unaired TV pilot starring Kanye West in which he tries to be pull off a black Larry David and completely fails miserably.

Kanye West huh, what can’t that guy do? Well he can sell a plain white t-shirt for $120 and be a complete dickhead 99% of the time but one thing he definitely can’t do is act. Or at least not judging by this scene from a pilot TV show he filmed back in 2009.

The show seems to be heavily influenced by Curb Your Enthusiasm – apparently Kanye West’s opening line to the unnamed show’s director Larry Charles (who had also conveniently worked on Curb previously) was that he was ‘the black Larry David’ – and so they went with a Kanye West meets Curb Your Enthusiasm kind of vibe. Only problem is that Larry David is really brilliant and funny at being an awkward dickhead whereas Kanye West is only brilliant at being an actual dickhead.

Hence the show was never aired – network executives at HBO stated that it was ‘too hardcore’ which is why they had to pull the plug. Good cover story but I’m not buying it, especially after seeing the clip below. The fact is it just isn’t that funny and Kanye West just isn’t a good enough actor.

The scene here revolves around Kanye West meeting a Make A Wish kid who doesn’t even really like him that much. Hilarity ensues is probably what would follow next in an episodes synopsis, except it isn’t really actually that funny. I mean it’s OK, but it’s not exactly LOL funny if you know what I mean? In fairness I don’t think the sitcom is as crappy as people all over the internet are making it out to be, but it’s nowhere near as good as Curb Your Enthusiasm. Kanye West isn’t THAT bad in it either but again he does a bad Larry David impression and that’s probably the clip’s main downfall.

Some of the parts of this clip are actually kind of funny – I like it that Kanye West comes into the room with one of those dumb zip up hoodies that go all the way over his head and it’s funny when the kid doesn’t like him that much – but it also has some bits that aren’t really funny at all like when the woman calls Kanye West Kenny. I mean that kind of stuff has been done to death and it’s just stupid to think that anyone wouldn’t know how to pronounce Kanye West considering how famous he is, let alone someone who has booked him for a personal appearance.

It’s worth a watch, mainly for Kanye West’s awkward attempts at being awkward though rather than any kind of genuinely funny comedy. Check it out below and let us know what you think.