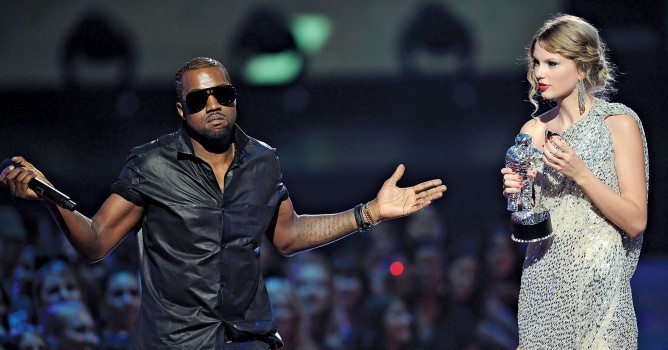 Gawker leak a recording of Kanye continuing his rant at the 2009 MTV VMAs in private; Taylor Swift, Pink, MTV, Fame, Anyone-That-Isn’t-Kanye all come under fire.

The way things are going, Kanye West is going to need his own subheaded section at the top of the Sick Chirpse homepage soon. It can’t be helped though, it seems like he’s a well oiled factory line for attention making, unintentional or not, whether it’s baby names, kicking off with paparazzi, failed sitcoms, saying stupid shit, selling ridiculously priced plain t-shirts, being a kind of egocentric arsehole, stage invading or you know, when he feels like it, being a world conquering rapper/producer. Though, that last part seems to have taken quite a backseat of late — aside from his actually alright new album Yeezus, I swear.

Backtracking though, to one of those things I mentioned; stage invading. We all know he’s fond of it, it seemed to be kind of a major hobby of his back in the day. Anyway, one of the most infamous is of course his intrusive ‘I’ma let you finish’ rant during Taylor Swift’s acceptance of her Best Video award at the 2009 MTV VMA awards — see, in Kanye’s opinion his bezzie Jay-Z’s missus Beyonce had the best music video of all time. Don’t get me wrong Single Ladies was a good video, I may have mentioned before that a friend of mine became quite obsessed with it, and the both of us spent a considerable amount of time tripping-the-light-fantastic on 2C-I watching it on loop one evening.

We all know what I’m talking about here. The Kanye/Taylor incident I mean, not watching Single Ladies on loop hallucinating. Well, Kanye was very publicly apologetic about the whole thing shortly after it, though, as if anyone hadn’t guessed, it doesn’t seem like that apology was all that sincere and was no doubt done to save face. That is, if this leaked recording of Kanye shortly after his outburst is anything to go by.

In it he lets loose about Taylor Swift, Pink performing at the awards, his mother’s death in relation to all this, writing his Run This Town verse, Eminem, his determination and how there’s no one like him around. Have a listen, and bask in all his glory.

Kanye West Walks Into Street Sign, Throws Tantrum At Paps, We Laugh At Him