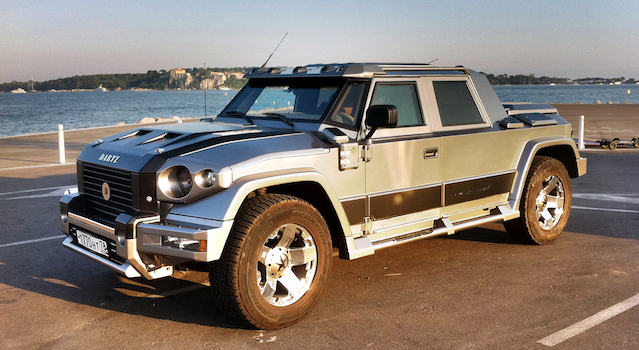 In an attempt to protect his family from ‘weirdos and psychopaths,’ Kanye West has decided to buy two armoured SUVs that are landmine and rocket launcher protected and cost a cool $1 million each.

Another day, another time that Kanye West does something absolutely ridiculous. It’s almost like clockwork. Today Yeezus is in the news because he’s decided to splash out some small change – just $2 million, no big deal – on two state of the art armoured SUVs. But why exactly would he even need these and just what the hell are they even?

The SUVs are made by some company called Dartz over in Latvia and this particular model is called the Prombron and it’s based on the Mercedes G Class apparently, although I’m not really a car guy so I can’t really confirm or deny if that’s true. I guess Dartz mainly sell these cars to African dictators and ridiculous celebrities like Kanye West, so there’s clearly a massive market for these things and they seem to be tapping into it pretty well.

These badboys can be bought for as little as $400,000 but there are a bunch of optional extras that you can stick on them, which include ‘fake whale penis leather (what?!?)’ and ‘jewel encrusted snake ornaments.’ Both of these sound really cool but I’m not sure if they’re worth whatever the hell this stupid company is charging for them though. I guess when you’re a baller like Kanye though it ain’t nothing at all to get some fake whale penis leather installed.

Kanye also paid extra to have the vehicles both landmine and rocket launcher protected. I don’t know how anything can even be rocket launcher and landmine protected but that’s a pretty cool feature to have, albeit completely unnecessary when these vehicles are just going to be driving around LA all the time. I mean when the hell are there ever any landmines or rocket launchers in LA except in 24?

Here’s a couple of pictures of the awesome Dartz Prombron Iron Diamond that Kanye is getting made up for himself. I really like the one with the hot babe standing in front of it – that’s some sick marketing from Dartz right there, you know that, and I also like the one that looks like it’s driving around a regular neighbourhood, as that’s probably how stupid it is gonna look when Kanye is driving it around LA in a couple of months: 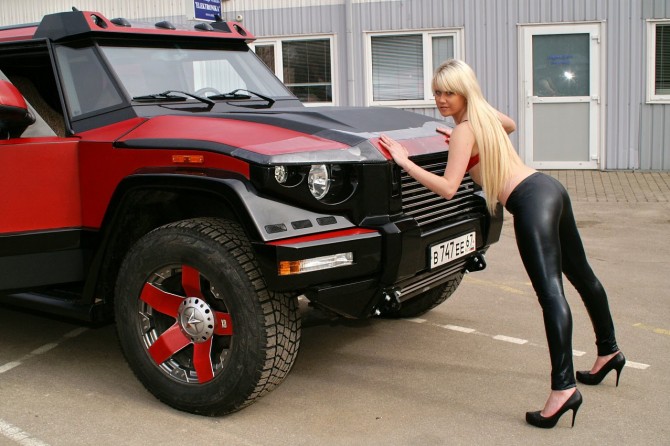 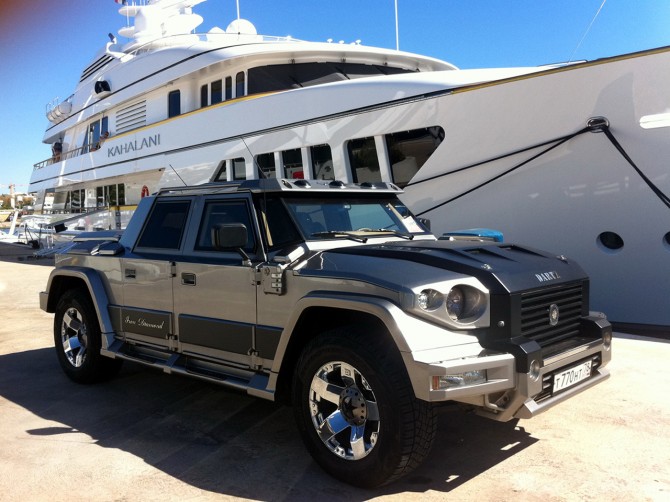 The reason that Kanye is buying these SUVs though is clear, at least in his own head – he needs to protect his family and in particular new born baby North West. Apparently Kanye’s whole life view has changed since the birth of his daughter so it shouldn’t really be any surprise that he’s dropping a cool couple of mil on these state of the art SUVs which he has dubbed ‘the North West Protection Mobiles.’ Kanye is allegedly well aware of the weirdos and psychopaths that his family attract due to their high profile and is leaving NOTHING to chance over their safety, hence commissioning these badboys to get sent over from Latvia.

Slightly too excessive? Probably not really considering it’s Kanye West we’re talking about, I’m surprised he hasn’t bought an island for his family to live on and surrounded it with a ten foot wall that you have to pass through three checkpoints to get into and then know some super secret password. That really wouldn’t have surprised me because Kanye West is pretty much nuts/out of control.

Anyway, the vehicles are scheduled to arrive sometime in October before Kanye starts his US tour so if you happen to be around LA then make sure you look out for them. I mean it’s not like they’re inconspicuous or anything, which will probably succeed in actually ATTRACTING the weirdoes and psychopaths more than if Kanye and his family drove around in a normal car. Still, even though they might be able to find Kanye and his family, there’s absolutely no way they’ll be able to do anything because you know that shit is impenetrable yo. Bring your rocket launcher fool, see if Kany West gives a shit. Tim Williams

Kanye West Freaks Out At The Paparazzi