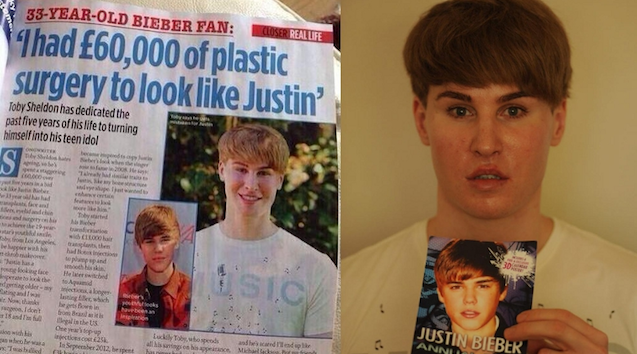 We’ve featured a lot of stories about people having ridiculous kinds of surgery, but this is hands down the dumbest.

A Los Angeles based ‘songwriter’ called Toby Sheldon – who is 33 years old – idolises Justin Bieber to such an extent that over the last 5 years he’s spent $100,000 on plastic surgery on making himself look like his idol. Money well spent?

The most recent procedure Sheldon underwent was the controversial ‘smile surgery‘ which effectively gives you a permanent smile by slicing up the corners of your mouth and lifting them so they remain permanently upturned and is pretty much all kinds of gross. That particular procedure set him back $15,000.

Apparently Sheldon is also scared of ageing and this played a part in his decision to change his facial appearance. He’s undergone multiple plastic surgeries, Aquamid injections and hair implants in his quest to look  ‘just like Justin.’

Toby believes that his surgery has been 100% worth it, despite the pain he has endured as a result of it in the recovery process: ‘My smile surgery took more than a month to recover from and, after my eyelid surgery, I couldn’t open my eyes for a week.’ Toby says that one of the best parts of the results of his surgery is that his friends totally love it and now call him Toby Bieber and ‘shower him with compliments.’ He must have some pretty nice friends considering he looks more like a Justin Bieber action figure rather than Justin Bieber.

So Toby, it sounds like it was definitely worth it mate. Aside from the fact he doesn’t even look much like Justin Bieber, and looks more like one of the Thunderbirds and a complete freak of course. It’s insane that a 33 year old man is so obsessed with celebrities – and not even cool celebrities at that, but lame wiener celebrities that are about 15 years younger than them – that he physically changes his appearance to try and look like them. It’s also completely insane that someone who is a songwriter who nobody has heard of can spend $100,000 on plastic surgery in the first place.

I think the most tragic part of the situation though is that the guy didn’t even look that bad or old before he had the surgery?! In fact I reckon he looks pretty good for a 33 year old apart from the fact his hair is thinning slightly, which isn’t really something to be that ashamed of in your mid 30s. Still, it’s no reason to go to the lengths that this guy has gone to in order to try and remain youthful. Tragic. 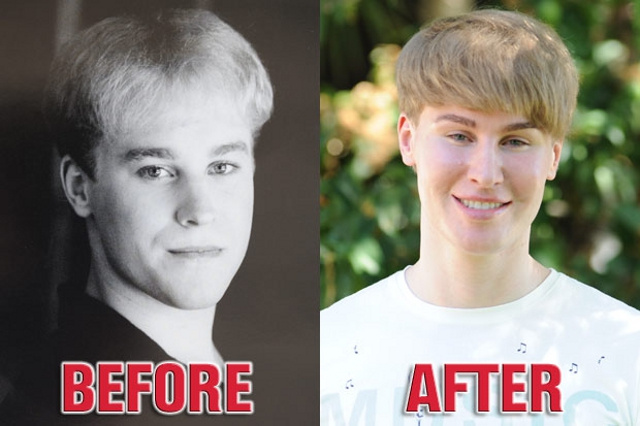