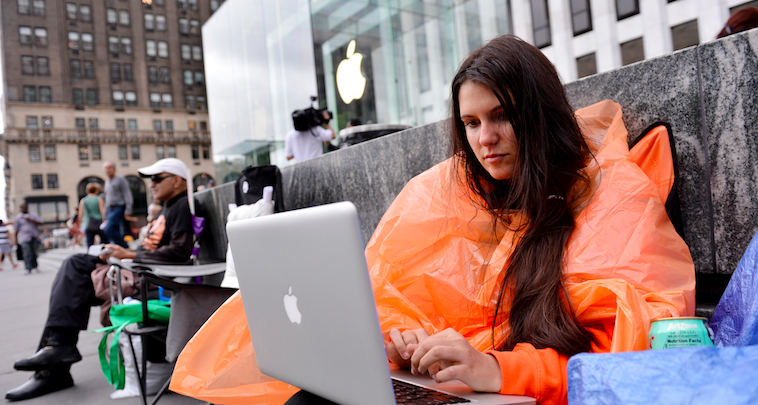 The iPhone 5 came out on Friday and morons queued for days to be one of the first to get their hands on it so they could look cool when they went out of the weekend.

So unless you’ve been living under a rock then you probably know that the iPhone 5 came out on Friday (if you are living under a rock check out the Sick Chirpse feature on its new capabilities, or to summarise it’s slightly lighter and longer and can fit more icons on the screen) and all the idiots out there scrambled to get to the Apple store so that they could walk around town at the weekend looking like hot shit with their iPhone 5.

My Facebook news feed was clogged up with idiots talking about how they ‘had just got back from the Apple Store, love my new iPhone 5’  or ‘can’t believe I ordered my iPhone 5 off the internet and it hasn’t arrived yet #vexed’ etc etc. I really wanted to delete some people because they were being such twats but I just can never bring myself to do it. I mean, it’s a fvcking phone FFS with a couple of extra icons on it that’s slightly lighter, is it really that fvcking cool that you’ve got one the day it came out? What is even good about that at all? I mean I’ll probably get one when my contract is up and I get a new phone sure, but that’s just because it makes sense because it’s the latest one, I don’t NEED it the day it comes out so that everyone I know on Facebook thinks I’m a hip fresh guy.

In fact, almost everyone I know seems to think that anyone who has got an iPhone 5 already is a twat, so surely by getting one all you’re doing is making everyone think you’re a twat and NOT a super fly hipster who’s down with the kids? Interesting question huh – are people knowingly buying iPhone 5’s because they want to be perceived as idiots? It seems pretty universal that nobody EXCEPT the owner of an iPhone 5 actually thinks it’s cool to have one at this point so the owners themselves MUST have realised this right? I guess they’ll probably laugh it off as people being jealous of their money or coolness but really, deep down they must know that they’re twats, right? They probably don’t even have any friends to call off their new iPhone 5.

Here’s one of the mindless Apple iPhone drones being interviewed as she waits outside the Apple Store and this is exactly the kind of person I’m talking about in the above paragraphs, although I don’t think when I was writing this I could have envisioned that someone like Rachel in this video could actually exist. I don’t know who Not Sam is (the interviewer) but he looks like he might be guy from DJ LMFAO embarking on a new career after he ended his music career at the weekend. He does a pretty good job of interviewing this retard and keeping a straight face as she continually makes less and less sense during the interview so the signs are promising for his new job.

But yeah, people like Rachel are the reason that I feel like I want to kill half of the population of the world. Why the hell has she been waiting in line for the iPhone 5 for two days? The answer is because she wants to be cool and be seen with her iPhone 5 obviously, but seriously most people do a better job of at least pretending they know something about it than this retard. The dumb bitch hasn’t even seen the iPhone 5 and doesn’t know any of the specs, she doesn’t like using the internet because it might scam her (although later on she says she’ll use the internet on Apple 5 and hopefully it won’t scam her), the main activity she’ll be using her phone for is texting her friends (it’s hard to believe she even has any friends or a boyfriend who she also mentions) and she doesn’t even know what it’s even called because she keeps calling it Apple 5 and Apple phone 5. Basically, she’s a fvcking moron and I can’t really put it into words just how stupid and misinformed she seems to be about the iPhone 5. It’s astonishing.

I don’t want to diss poor American rednecks but she even said she has never even owned a phone before (or a camera or anything like that), but she has shared them. What!?!? Who the hell shares a phone? Isn’t that just a house phone!? What the fvck is she talking about? Actually she isn’t poor because she says depending on how much the iPhone 5 costs she might buy three or four. OK fine, I get that she hasn’t owned a phone before but buying three or four?!?! What the hell is the point of that? I mean I could maybe, just maybe understand it if she wanted to separate work and home phones, or maybe even more idiotically separate family or friends or something, but as she’s never even owned a phone before she doesn’t even have any numbers or anything like that to even make this separation, and to be fair that whole situation is a push anyway. Why the hell would anyone need three phones!?!?The whole thing just confuses me. It confuses me how people like this can exist and what the hell they are doing with their lives and time. In fact it makes me kind of angry and makes me want to smash my fvcking iPhone and never be associated with it again.

Of course I’m not actually going to do that but seriously, try watching this video without shaking your head or letting your jaw drop the floor at some of the things she is saying. I would argue it ‘s impossible. Check out this video and marvel that people like this actually exist and be thankful that you aren’t one of them. Unless you are one of them, in which case sort it out:

Worst iPhone App Ever – The Cleverbot