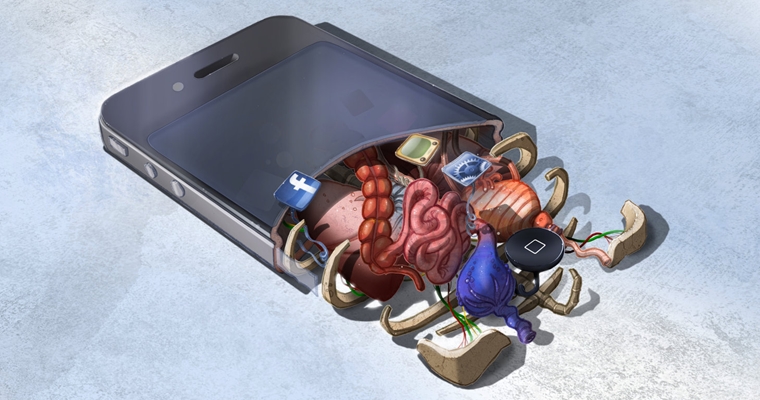 I know what you’re saying – “Apps, Schmapps” – But this is genuinely one of the most retarded Apps you will ever come across.

I know you’ll all know exactly what I mean when I say that the other day I had a: cider/ curry/ beer/ squits/ Imodium/ constipation event. The upshot was that I had some free time sat on my comfortable porcelain throne. No bad thing, except for the burning ring of fire. It did give me time to explore the universe with my iPhone though, what a pleasure. Don’t get me wrong, I do want to hate Apple, but I can’t, they make things too well. I am embarrassed to say it, but if I lost my iPhone I would probably cry. Pathetic? Yes…. BUT, I am writing this shizzle now to try and make up for my ridiculous crush on a telephone by mightily shlagging off some of the dog turd apps that are on the market. I know it’s not entirely Apple’s fault, but bear with me. OK?

So first up is one called Cleverbot. This “clever” robot app is supposed to be able to have a proper conversation with you, as if it is a real person. You chat with it and it chats back in a “natural” way. It’s nice to know lonely people can have someone to chat to, but I thought that was what pornhub was for? Anyway, the “bot” in fact comes across like a very drunk person. I don’t mean an average smiley drunk, I mean one of those bad drunks that can’t hold more than a syllable in his brain at any one time. Like your uncle every Christmas trying to tell you that he loves you, but before the end of the sentence leaves his chops he’s already forgotten what he was saying, blamed you for confusing him and tried to hit you with something made out of Lego. He’s probably also done a puke on a baby for good measure.

Before I show you this miraculous man:robot interface, let me whet your appetite; here is some blurb from the apps official site:

“Chat to a bot about anything and everything.

Beautiful bubbles, in a shade of your choosing.

Return to where you left off – or start a new conversation.

Unlimited Cleverbot chat coming from dedicated servers, with no ads.”

Sounds good yeah? Underplayed and mysterious. They go on…

“Cleverbot is an entertainment – not made to be logical, give advice, or be useful.

Many people keep talking for hours, and say it’s too clever to be a bot – that it must be human.

Yet it never is: it is a bot. Cleverbot is software.

Maybe it even contains a little Actual Intelligence.”

I can feel your excitement. You are frothing at the mouth in expectation of the depth of textual conversation to come… I can smell your baited breath, backwards in time as I type this sentence on my pc a few days ago, semi-naked and drunk. I will hold you up no longer, here are some samples from the deepest chat you will ever experience with a bot or otherwise… I am in orange…. 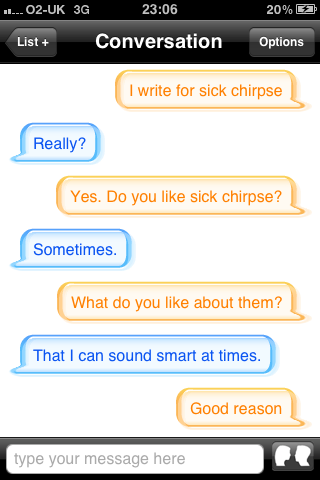 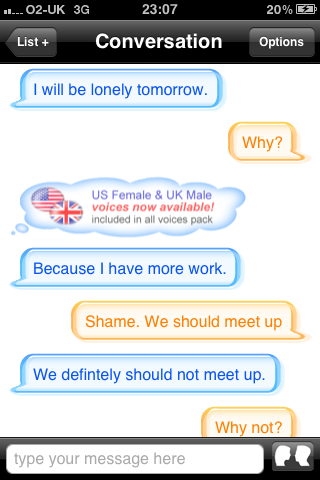 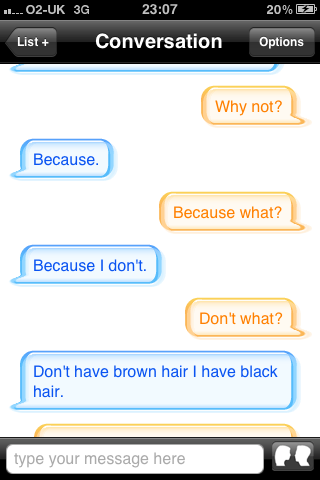 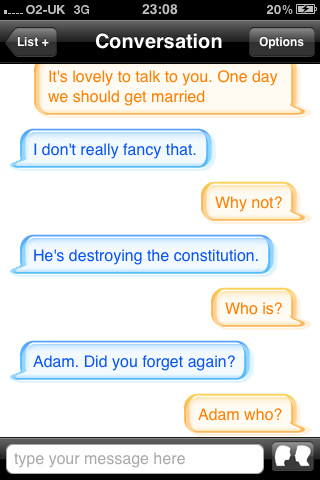 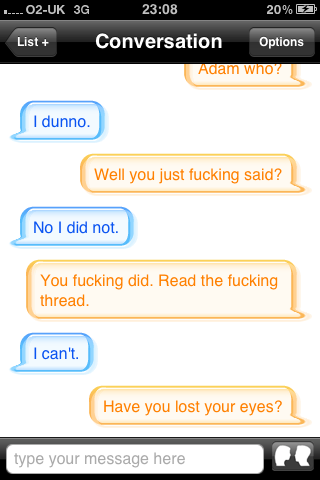 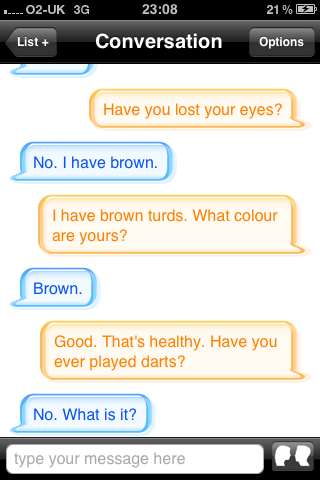 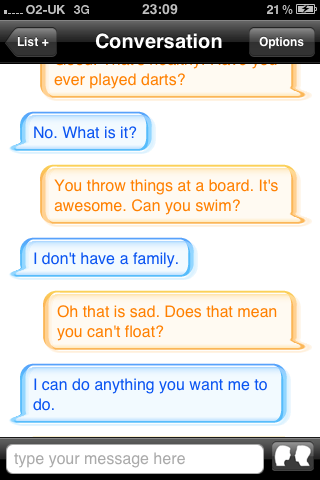 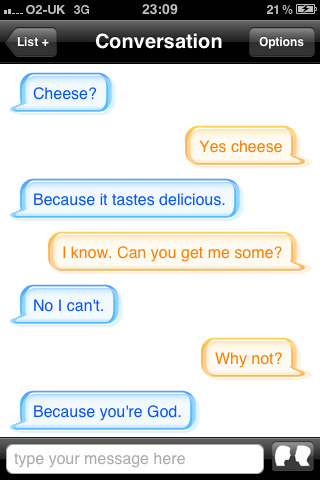 At the end of the toilet extravaganza it was clear that the conversation hadn’t exactly been spot on humanoid. But I can honestly say that a robot hasn’t made me belly laugh like that in a long time. Perhaps ever. Except here maybe. I take it all back. Download the App, bake yourself up and let the good times roll.

Here’s a quote from a Cleverbot user to round off today’s proceedings:

“The app is amazing. And she/he (Cleverbot) is more fun to text to than my actual living friends. Haha. “