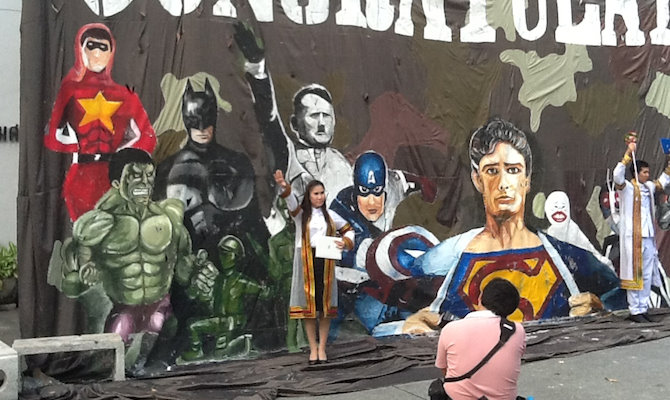 Is this poster of Hitler as a superhero outside Chulalongkorn University distasteful or can you see the funny side?

Thailand’s premier university has apologised for its billboard displaying Adolf Hitler alongside Superman and other superheroes, saying it was painted by students who didn’t realise Hitler’s image would offend anyone. The billboard featured Hitler’s arm raised in Nazi salute next to Superman, Batman, Captain America, the Incredible Hulk and Iron Man alongside bold white letters reading ‘Congratulations’. Note the student posing in front of the poster has opted to mimic Hitler’s salute over all the other superhero poses she could have chosen, in case you were in any doubt over Hitler’s still-pervasive influence.

I think this is an apology we can all accept. Who knows what the history syllabus is like in Thailand? Maybe they’ve not got to the part yet where you discover that Hitler wasn’t Batman’s sidekick and was in fact a mass murdering maniac. You’re forgiven, Thailand.

History Of The Hitler Moustache