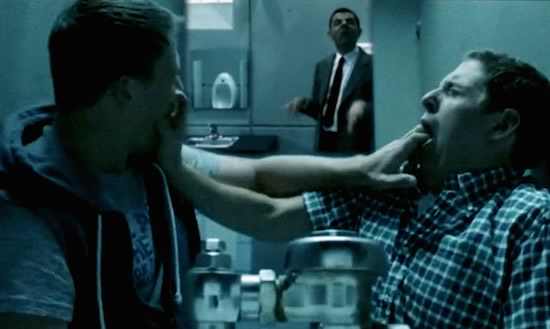 A return to the bar where all your favourite movie characters hang out and kill each other.

The original Hell’s Club video is one of the best on the internet, as all of your favourite movie characters meet at a nightclub and end up murdering each other in one of the best displays of editing we’ve ever seen.

Naturally, it’s going to encourage sequels and the latest instalment is set in the bathroom of Hell’s Club on that crazy night from the first one. Watch as Leonardo DiCaprio, Mr Bean, Demolition Man, The Big Lebowski and a whole host of others all convene in the bathroom for a suitably ridiculous 8 minute edit:

Jokes. The Candyman edit with Jim Carrey and Leonardo DiCaprio/Fight Club is probably my favourite part, but there’s a lot of funny stuff going on in there. That dude must really love movies to mash them up so well like that eh?

For more Hell’s Club, check out another sequel here. They just get better.