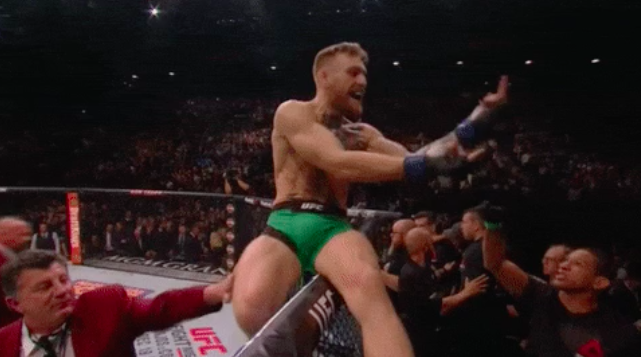 The guys was NOT happy.

Jose Aldo’s cornerman already got his own blog the other day with his A+ reaction to watching his fighter get knocked out in 13 seconds, but what we didn’t initially see was his reaction to Conor McGregor’s celebration in their corner, in which he stuck two middle fingers up at Aldo’s crew.

Days later, Aldo’s cornerman Hacran Dias reveals what he said to McGregor while it was all happening:

I told him to fight me. And that I would fight him for free. That was not a good moment and now a lot of people are saying dumb stuff. I don’t know if he saw me or if he pretended he didn’t. He looked at me quickly and pointed my finger at his face, he could’ve played it off, but I told him to fight me. I guess we will see. This is a tough subject to discuss now, man I wish I was fighting him.

Dias also revealed that he was stunned at how the fight turned out, which I think speaks for most people who watched it.

Maybe Dias has calmed since then though, since it was revealed what McGregor himself said to Aldo following the knockout.