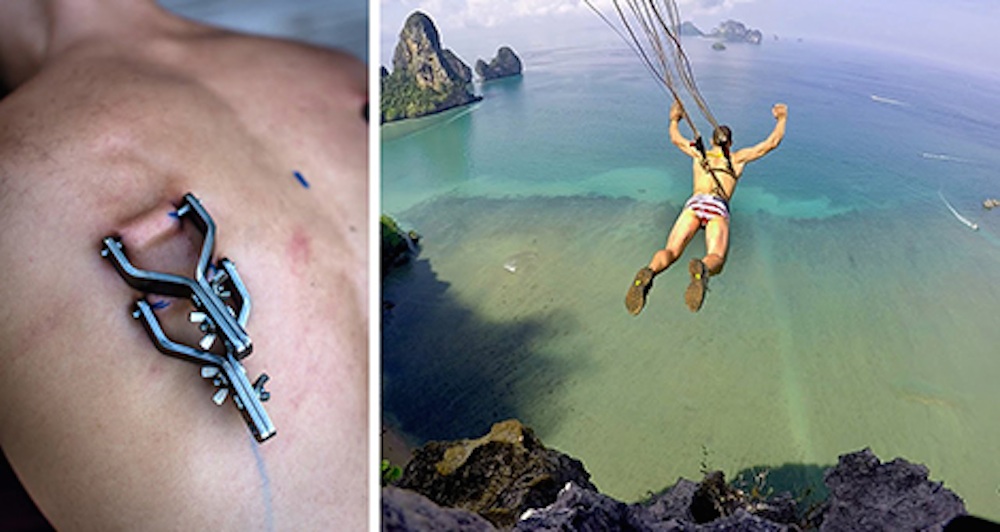 Welcome to the world of suspension BASE jumping.

We’ve featured the crazy world of suspension BASE jumping before on the site, but videos profiling it don’t seem to come around that often – probably because it’s highly dangerous and highly insane. It basically involves people attaching hooks to the skin of their backs and then attaching parachutes to said hooks and jumping off cliffs or buildings to perform a BASE jump.

Yeah, I told you it was highly dangerous and highly insane and the fact that only 11 have ever been completed kind of emphasises that fact. I mean although they say it won’t happen, I wouldn’t trust my skin to not rip off my back by the force of the parachute, leaving me to plummet to my death. That doesn’t seem to have happened to anyone yet, but it sounds like the kind of thing that might happen if I was ever foolish enough to try this exercise.

For now though we can just watch this crazy mofo Josh Miramant go for it instead. The 28-year-old completed a 380-foot jump from a cliff in Ton Sai, Thailand which you can see in the video below. Speaking about it he had the following to say:

I’d never had any other piercings before and it was by far the most painful part of the whole experience.

I am not a masochist. I just came to enjoy the whole experience despite the pain, but I was certainly happy when the piercing was complete.

Well yeah, rather him than me. Looks painful and stupid to me – especially all the blood seeping out of his back after the jump – almost as dumb as these guys messing up a BASE jump and breaking their spines.