The Chirpse enjoys crap food and buckets of Belgian lager as we experience the sights, sounds and smells of one of Europe’s biggest punk festvals.

Last weekend, your humble correspondent got in a car and travelled with his associates all the way to Meerhout, Belgium for the annual Groezrock festival. For the uninitiated, Groezrock is one of Europe’s biggest punk rock shindigs and every year thousands of scuzzy Euro-punks turn up to enjoy beer, shitty food and a load of punk bands being all shouty or singing about emo stuff like love or whatever. Being that Belgium is quite possibly the most boring country on Earth, the Belgian youth are eternally grateful for the mere existence of Groezrock and turn out in their droves to get all drunkified and stupid. This year, the Chirpse was among their ranks.

The first thing to understand about Groezrock is that it is a very basic, meat-and-potatoes affair, except the meat’s a bit gristly and the potatoes have started sprouting those weird knobbly bits as no-one’s been looking after them properly. There are no yoga workshops or any of that fruity nonsense you find at boutique festivals in the UK. People are here to ROCK. They are also here to DRINK. Heroic amounts of beer are thrown down the necks of the unwashed hordes and the most popular brew on site is Jupiler, a Belgian ale which very often reduces even the sturdiest soul to a pathetic drunken shambles, like this guy; 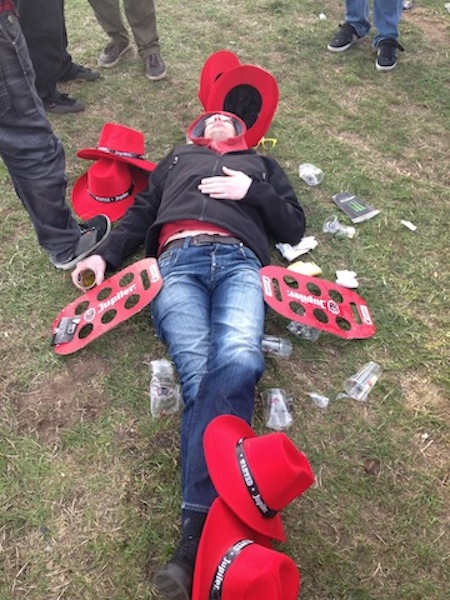 Special mention must also go to the food at Groezrock, which more often than not is usually the sort of thing that, if you were a parent, you would give to your children because you didn’t like them. There is an abundance of chips and other hate-fried delights, but as this is a punk festival, the vegans have to rep their lifestyle with all manner of animal-friendly, slightly sanctimonious savoury goods on sale. We thought the tagline for the vegan food tent actually sounded mildly sinister/insulting; 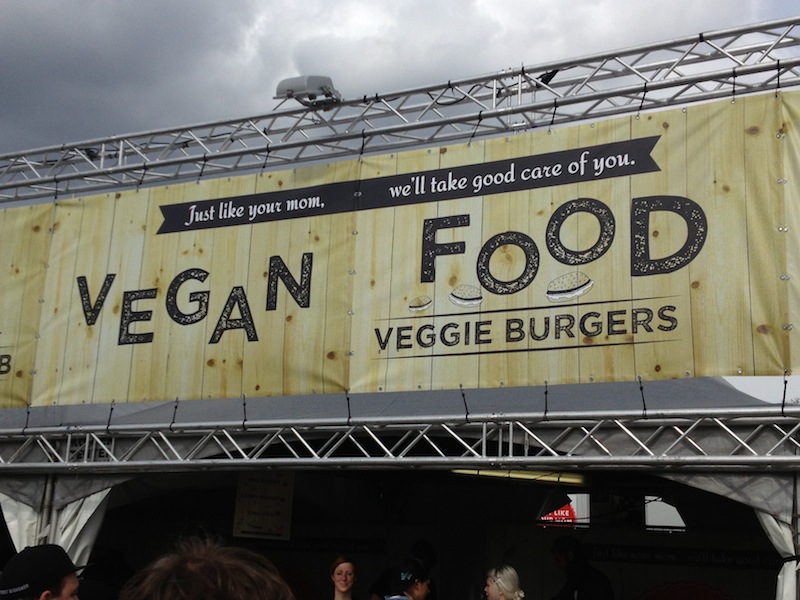 But man/woman cannot live on food and drink alone, there must be BANDS. And thankfully there were a ton of decent outfits at this year’s bash. Some of the bigger names included Bad Religion, Bring Me The Horizon, Rocket From The Crypt, Rise Against, And You Will Know Us By The Trail Of Dead and a highly-anticipated appearance by Flag, a Black Flag reunion of sorts featuring most of the original members.

The first band we saw was AC4, a Swedish hardcore outfit featuring Dennis Lyxzen from Refused on lead vocals. They were midway through their set just as we got there but I wasn’t too sure what to make of it as I was at the back and got sidetracked trying to find somewhere that sold Jupiler in pint glasses (the de-facto portion is a half-pint, which is convenient but also deceptive as you drink it way too quickly and before you know you’ve made your way through about six of the bastards and you’re completely shitfaced). Nonetheless, I got the obligatory crap-iPhone-picture-taken-by-some-monkey-at-the-back image. Here it is! Makes you feel just like you’re there, doesn’t it? 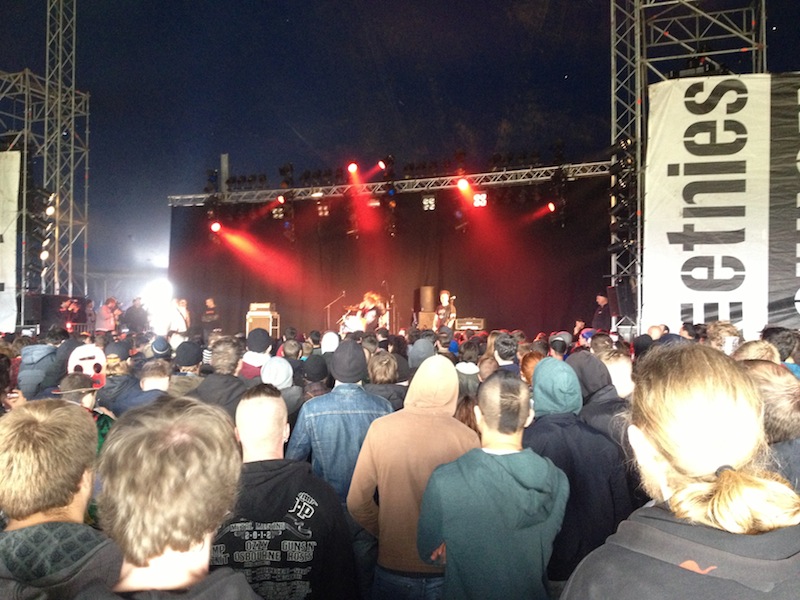 Things proceeded merrily until night-time hit, which is when it all started to get unpleasant as the entire festival was consumed by an arctic chill. We tried to bolster ourselves against the brutal cold by upping our carb intake (more chips) and adding another layer to our booze jacket (more beer) but it was something of a losing battle as it became clear that Mother Nature doesn’t like punk rock (she’s probably more into stuff like Fleet Foxes) and upped the frosty atmosphere even further. We had no option but to seek refuge in one of the few distractions onsite, the festival market, where you can buy everything from bootleg Dead Kennedys t-shirts to obscure vinyl and funny hats. We spotted some particularly dope Breaking Bad t-shirts which riffed on the cover for the Descendants’ ‘Everything Sucks’ album; 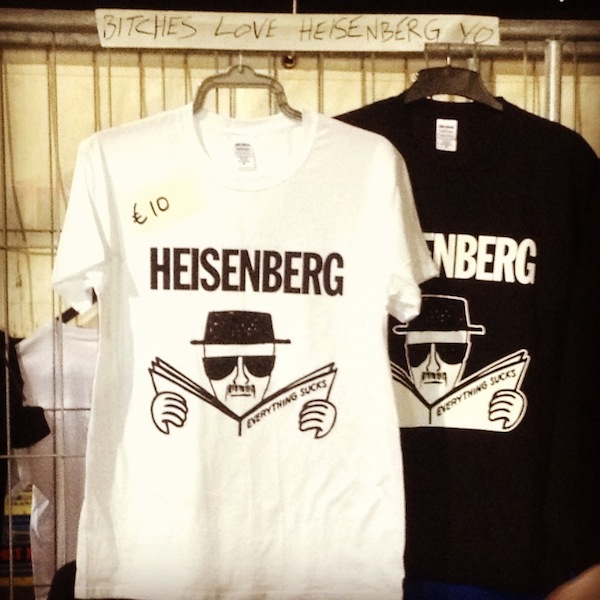 We ventured back outside and tried to cheer ourselves up by going to see Rocket From The Crypt but by this point we were at less of a punk festival and more of a giant fridge somewhere in western Europe. The cold was pissing on everyone’s chips, so much so that Rocket’s set had all the atmosphere and joie-de-vivre of an empty bag of sweets. Rocket From The COLD, more like! HAHAHAHAHAHA. You can almost feel how pissed off the crowd is in this photo; 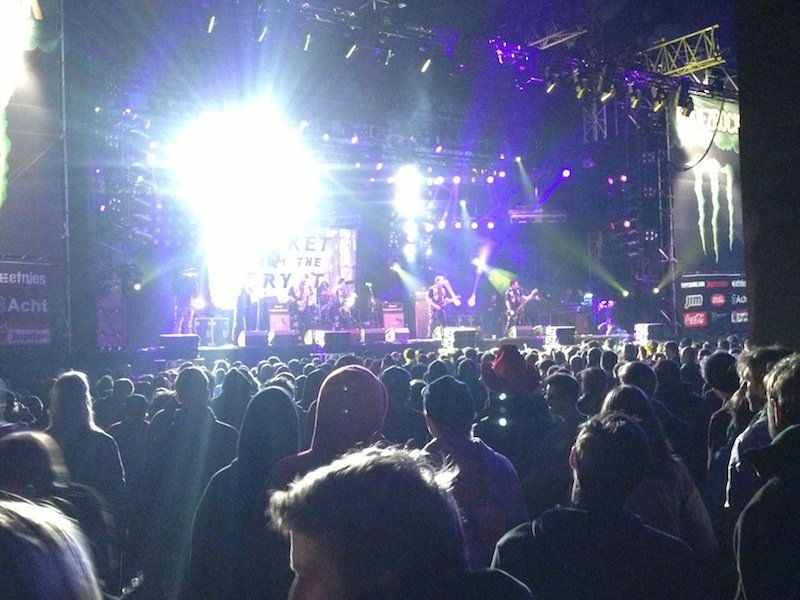 By about 1am we’d all lost the will to a)live and b) drink anymore so we went back to our Belgian travelodge. Eight hours, one hangover and two beroccas later we headed back out for round two, which was a more jovial affair as bright Spring sunshine bathed the site in warmth. People were feeling the love so much they even got their willies out. Well kind of, as I’m pretty sure this one was fake, or at least I hope it was; 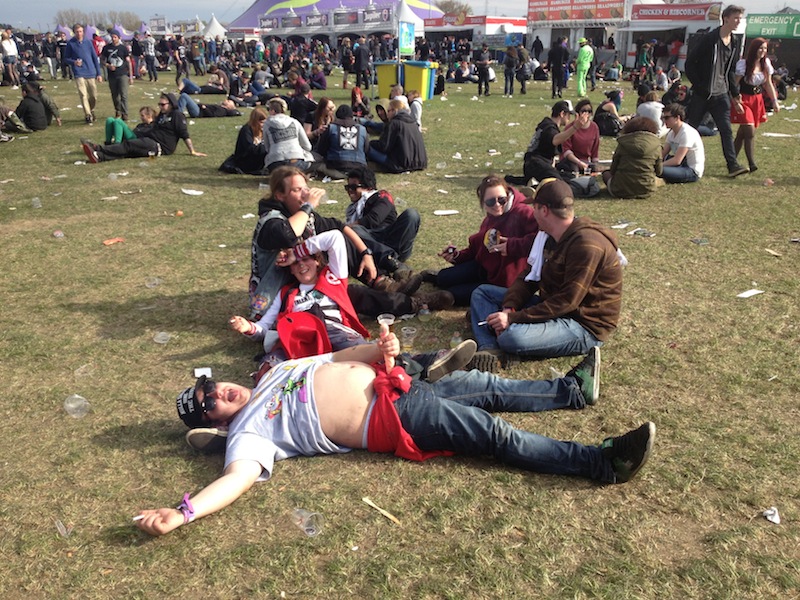 Other curious sights included these chaps, who we thought at first were some sort of male spin-off of Pussy Riot (Penis Riot?) but instead turned out to be those mysterious musical types known as Masked Intruder, doing a TV interview. Those ski masks but have been killing them by midday as it was like 70 degrees or something; 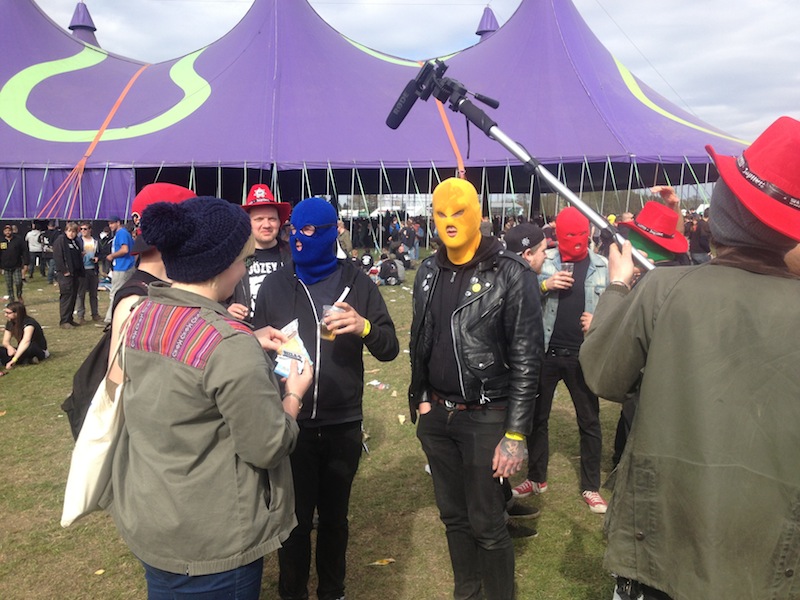 There was also some quirky merch available from bluegrass punks Old Man Markley who, along with t-shirts and fetching handmade jewellry, also had these delightful little numbers for sale. You can’t really argue with the wisdom inscribed upon them; 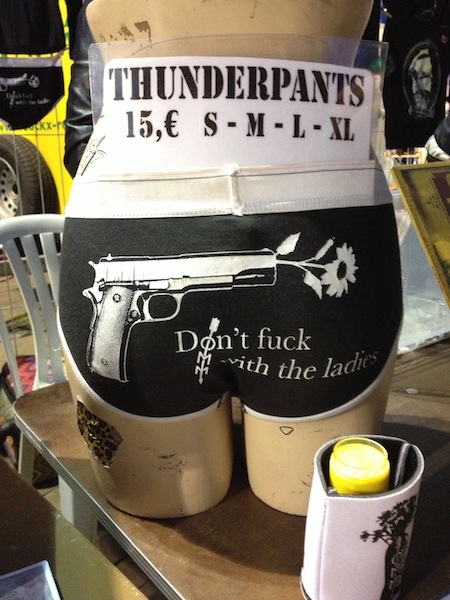 The absolute highlight of the weekend, for me anyways, was seeing Flag in action. For a bunch of dudes in their late 50s, they certainly knew how to bring the ruckus and laid waste to the Etnies tent on Sunday night, accompanied by an unending cascade of stage-divers. You could look at the shitty picture I took, but you’re far better off with the footage below, which captures the fury of their set perfectly;

Invigorated by both the sight of some near-pensioners playing Black Flag songs and several rounds of Jupiler, we headed over to the main stage to catch loveable headliners Bad Religion, a man down but still as tight, solid and singalong fun as ever. I also got another crap photo. I really am spoiling you guys. 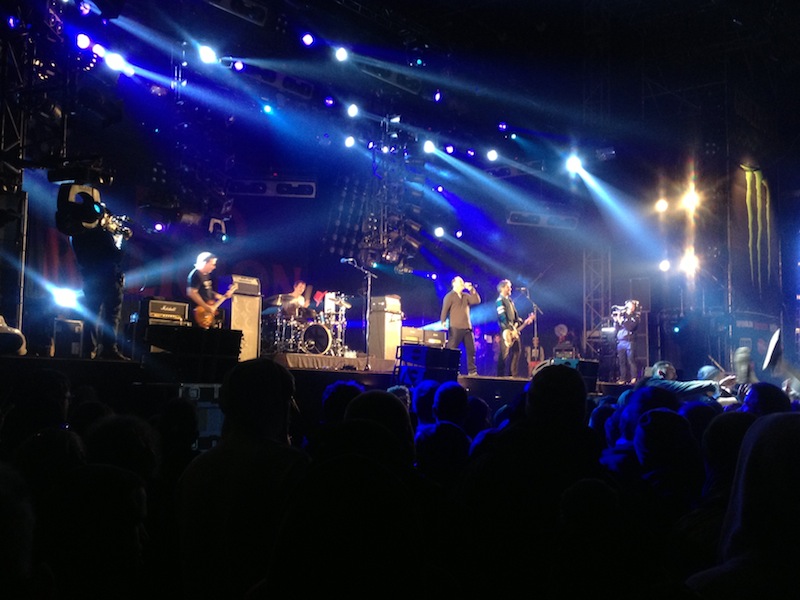 And thus our festival was brought to an enjoyable pop-punk close. AND we didn’t contract pneumonia either. Bonus! Despite the place turning into a tundra for select portions of the weekend, we had a blast and trundled back to England with way more punk cred than we left with. See you next year, Groezerrati! 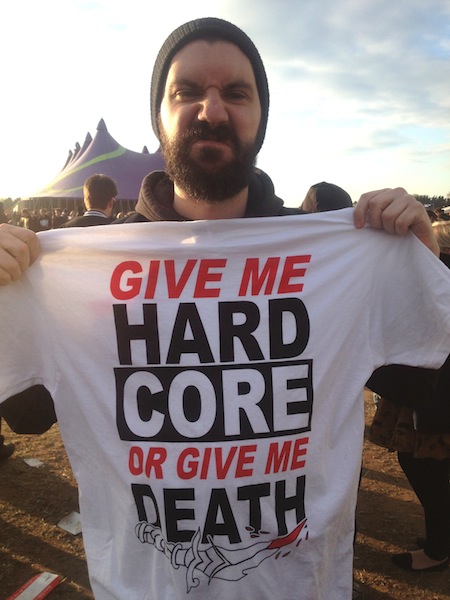