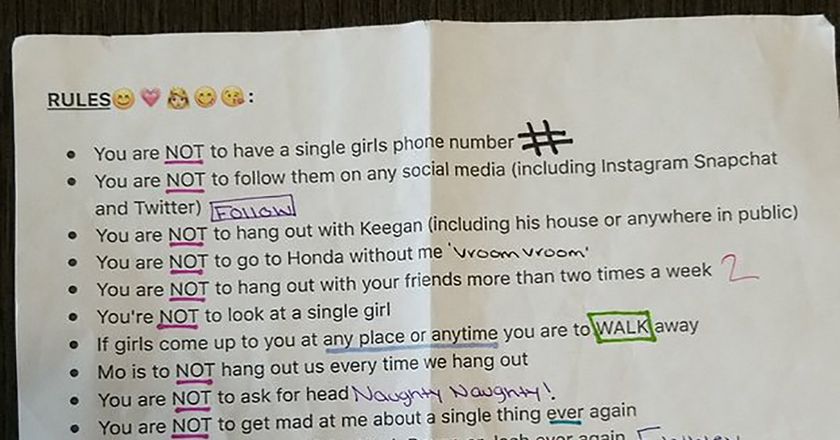 It’s fair to say that most guys have had their fair share of insane girls for girlfriends – and hey I’m sure a bunch of girls have had insane boyfriends too, but that’s not what this article is about – but I think this girl might definitely take the biscuit as the most insane one of all time.

Guys might joke about their girlfriends getting jealous of other girls or not letting them hang out with their friends, but this girl has literally forced him not to do this and even written in down in a contract that he presumably had to sing in order to be with her. It was found in the back of an old car and then tweeted by a guy who ended up deleting the original tweet because it was blowing up his phone so hard with notifications because it was that mental.

Luckily someone had decided to screenshot it though and here it is for your perusal:

That's an Ex-girlfriend right there.

Man there is just so much more I need to know about this – like who are Keegan, Tyler, Noah, Deven, and Josh? Who is Austin? Where is Honda?

More importantly, just how old is this girl to begin with? I’m thinking that she sounds like she’s about 16 or something, but I’ve kinda got a feeling that she’s the kinda pampered girl/woman that’s got her own way her entire life and might be around 23 or 24 or something. Either way, I really hope that they’re not still dating and the fact that the contract seems to have been discarded is symbolic of the status of their relationship too. For his sake.

For more crazy girlfriends, check out what this one did to the corpse of hey boyfriend’s ex. Bizarre.