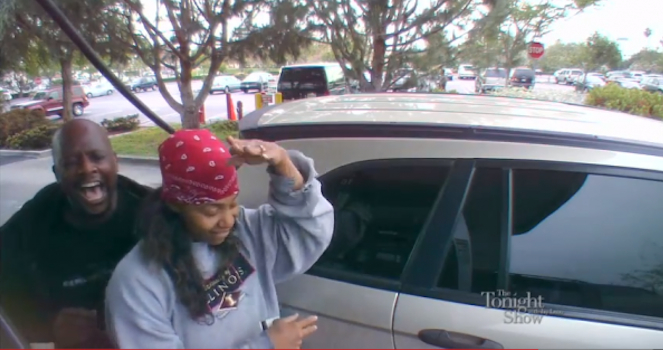 The ‘Tonight show with Jay Leno’ comes across the coolest couple ever by complete chance!

Yesterday I was browsing through my newsfeed and came across the Sick Chirpse headline “This is no doubt the funniest thing you’ll watch all weekend.” Now as undoubtedly funny as hearing a foreign commentator break out into ‘Eye Of The Tiger’ is, in my opinion it has nothing on this video.

This is the perfect way to brighten up your Tuesday evening. So here’s what goes down. ‘The Tonight show with Jay Leno’ has started doing “Pumpcast News”, where actor Tim Stack plays a fictional news anchor called Jack Rafferty who surprises unsuspecting people at gas pumps. He appears on a flat screen at the gas pump and provides them with free gas. It sounds pretty dull right? However, to get the free gas they have to do various challenges… luckily for them they came across the coolest couple in history, Will and Monifa Sims.

Out of nowhere Tim Stack appears on a flat screen at the gas pump where Will is about to start filling up his car and startles him. Tim Stack then asks him to sing a song in order to get free gas, which most people would probably be pretty surprised about. However Will just takes it in his stride in the most casual manner you have ever seen and blasts out a rendition of ‘Livin’ On A Prayer’ in front of everyone at the petrol station without a care in the world. At this point the camera pans out and you get to see his wife, Monifa, cracking up in disbelief/ embarrassment at what’s going on; she was just planning on getting her petrol and getting out of there like any normal pit stop.

After the loudest rendition of ‘Livin On A Prayer’ at a gas station ever is over, Tim Stack wants to hear from Will’s wife. To start with you think she’s going to be too embarrassed/ camera shy to do it but in actual fact this is where the video gets really good. I guarantee this will put a smile on your face….

Obviously these guys were a huge hit and everyone loved them. So Jay Leno invited them onto his show, which you can see below:

I think these guys are going to become celebrities off the back of just being excellent. There is a possibility that they may be actors already- but I don’t care it is such a good video!

Elevator Prank That Will Actually Make You Shit Your Pants

Don’t Look At My Girlfriend Prank