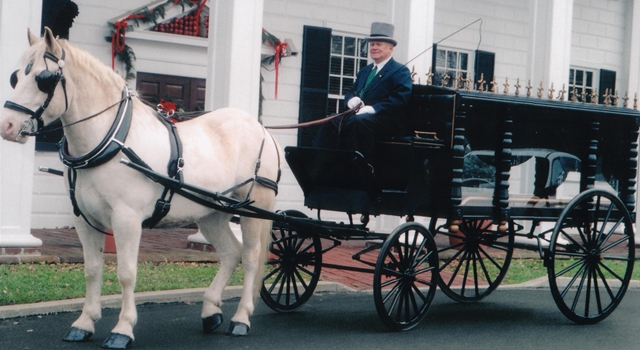 It’s difficult to envisage a way in which a funeral could get any more depressing and awkward.

Funerals are a rubbish time for everyone involved for many reasons. For starters they only happen when someone’s died. On top of the death you’re forced to hang about with people you hardly know and they’ve all got those depressing “sorry for your loss” faces on. You get great-aunts who you’ve never met (who aren’t even really related to you) trying to converse with you about people you’ve never even heard of just so they can get to the free volovants. Funerals are also a logistical nightmare and a massive cost. There’s not a single thing to like about funerals.

During a funeral last week in Hornchurch, East London, things went even more depressingly than normal. Ronnie, a 14 year old funeral procession horse dropped dead during the funeral march down the high street.

According to Carol Lawrence the Funeral Director at Harold Wood Funeral Services, Ronnie was in fine fettle and had been receiving regular veterinary check ups. There was no reason the poor nag should have collapsed and died in the street without any warning. But that’s what Ronnie did.

The Police and fire service were on the scene ASAP but soon realised they couldn’t do anything for the horse (possibly because it wasn’t on fire and because it was a horse). After the emergency services left the RSPCA rocked up, but even the might of the RSPCA can’t bring a horse back to life.

The coffin was transferred into the back of a hearse and according to the funeral’s attendees no time was lost. The incident just made the day even crapper for all concerned. Andy White, 46, from Dorset, said:

It was horrible. It was my wife’s grandad’s funeral and it upset us all.

Eddie Baptiste, 29, from South Ockendon, witnessed the horse’s collapse and summed up the general vibe like so…

It’s always upsetting going to a funeral but when the horse falls dead it’s even more so.

It sounds like Mr Baptiste has had some experience of these types of dead horse/funeral things before? Oh well, at least it was something for the funeral party to talk about when the volovants dried up and things got a bit awkward.