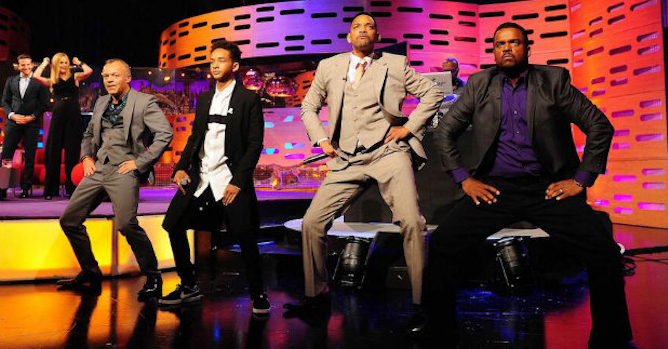 When Will Smith shows up on Graham Norton, you know that something sick is going to go down and he didn’t disappoint this time.

Everybody loves Will Smith and everybody loves The Fresh Prince Of Bel Air and probably knows the rap off by heart. The Fresh Prince is so popular that I’m pretty sure it’s still being shown every day on some satellite channel somewhere and will probably be shown every day on some satellite channel until the end of time. And that’s why everyone ever will probably love this clip too.

Graham Norton had a pretty stacked line up last night on his show: Will and Jaden Smith, Heather Graham, Bradley Cooper and Michael Douglas. Wow. It’s almost enough to make you want to stay in and watch TV at the start of a bank holiday. Not.

Anyway, like the last time Will Smith was on the Graham Norton show, they started talking about rapping and Graham Norton got Will Smith to do the Fresh Prince rap. Only this time he had brought a few surprises with him. Not only did Jaden help him do it, but he also had DJ Jazzy Jeff on the decks backing him up, and then brought out the one and only Carlton for a guest dance. Wow.

Everyone who stayed in last night was going absolutely crazy over it and saying it was the best six and a half minutes of television ever. I didn’t think it was that good, but you know it was pretty special. I think my favourite part about it though was when they got Carlton out to do the dance. You thought they might have a word with him or something and find out what he’s doing now, but no, they just wheeled him out, had him do his bit then wheeled him back to wherever he came from. Unlucky bro. See you at the next Fresh Prince reunion.

Ever Wonder What Carlton From Fresh Prince Would Look Like If He Was White?

Carlton’s Still Got The Moves