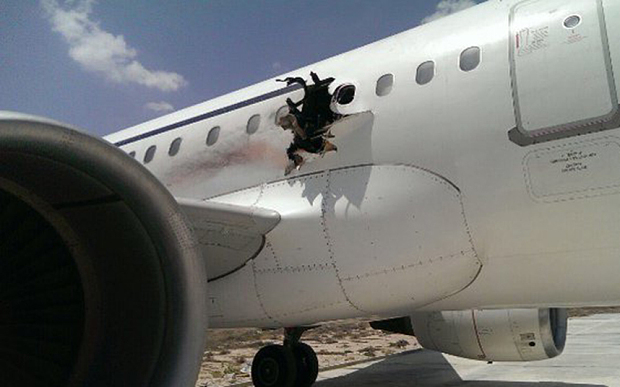 A ‘burning man’ has reportedly been sucked out of a hole in a plane apparently caused by a bomb, forcing the pilot to make an emergency landing in Mogadishu, Somalia minutes after taking off.

An explosion blew a gaping hole into the commercial airliner, with an aviation expert later confirming the damage was consistent with a bomb device.

Photos of the damage to Daallo airlines taken after the emergency landing. Two passengers were injured. #Somalia pic.twitter.com/2A5XTyOajm

According to witnesses an unidentified elderly man was engulfed in the flames and sucked out of the hole in the fuselage of Flight D3159.

Mohamed Hassan, a police officer in the town of Balad 18 miles north of Mogadishu, said residents had found the charred, dead body of an old man.

Here’s some strangely calm footage taken as the plane made its emergency landing:

According to a Somali aviation official, only two people were slightly injured as 74 passengers and crew of the plane were evacuated after the plane landed. Local radio reported the plane was on fire as it returned to ground.

I think it was a bomb. Luckily, the flight controls were not damaged so I could return and land at the airport. Something like this has never happened in my flight career. We lost pressure in the cabin. Thank god it ended well. 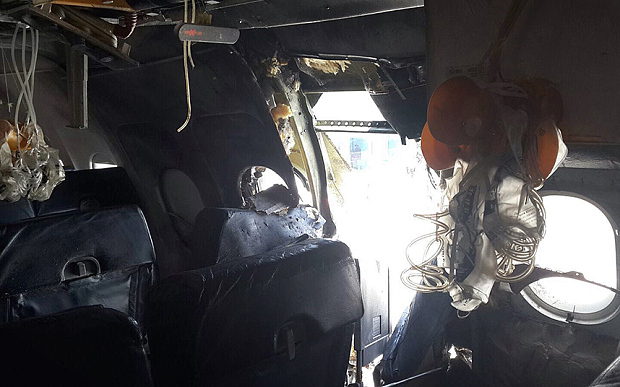 Unbelievable. Here’s the rest of us moaning about the fat person sat next to us or some other passenger who can’t stop farting, meanwhile this man literally got set ablaze and sucked right out of the damn plane. Really puts your shitty flight into perspective when you realise you could’ve been found burnt to death in some village in the middle of Mogadishu.

What really blows my mind though is how chilled out everyone on the plane is on that footage. I had to double-check that it was the correct video because everyone just seems so calm. Newsflash guys and girls — a bomb just went off on your flight and blew a hole into the side of the plane. Some guy got sucked out of the hole and landed on some grimy Mogadishu street. Meanwhile everyone’s just kicking back wondering what film’s going to show on the in-flight entertainment.  Unreal.

Still, not quite as gruesome as the guy who got sucked into a jet plane engine. NSFW as fuck.