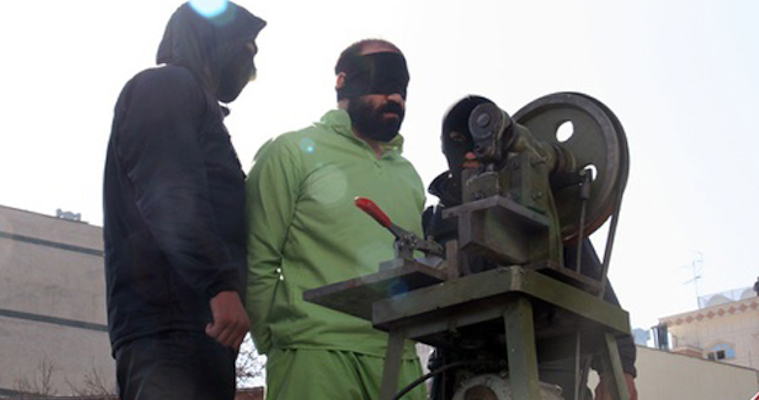 I agree that thieves should be punished but I don’t think they should have all their fingers cut off at a public ceremony by this horrific machine, no way.

This is pretty out there. I got accused of racism by a bunch of Sick Chirpse readers on Monday for saying that the African Nations Cup was shit but some cool dude wisely pointed out that there was a big difference between saying something was shit BECAUSE it was African and saying something was shit AND African, so thanks for that Hadrian Ainsworth. Absolutely killer name by the way, if you’re not already a millionaire I think you will be soon on the strength of your name alone. But yeah, I was a bit upset by those allegations even if it was just basic trolling, but I  don’t even give a rat’s ass if anyone calls me racist over THIS article because if thinking that Iran is really gross because it decides to cut off people’s fingers with this insane machine in public is racist then I will glady be deemed a racist.

I mean the whole thing just looks completely horrific and barbaric and makes me feel sick. I mean LOOK AT THAT MACHINE. I don’t know how it works because the pictures aren’t exactly a close up of it but it looks big and scary and definitely something I don’t want to put my fingers anywhere near. I mean I guess it looks like a vice with some kind of saw on it BUT MAN it looks horrific and I can’t believe someone has even invented it in this day and age and that’s it’s actually used by the government of a country rather than some psychopathic supervillain or whatever.

It’s also real backwards that they do it in public and that all the people chopping his fingers off do it in ski masks like it’s some kind of gang ritual or something. I know that when somebody gets the electric chair or gets hung or whatever then the executioner wears a hood but it just looks really weird when there’s a whole gang of people in balaclavas inserting a guy’s fingers into that demonic machine. It’s kind of  gross the victim is wearing a mask too but I guess that’s more practical than anything because nobody wants to SEE their finger getting cut off and if he could he would probably do everything in his power to get away when the chopper or whatever is coming down which could lead to some trouble for the guards.

â˜› Check This Out Next: Grenade Thrown On Pitch And Explodes During Asian Champion’s League Match

Depressingly, it was announced after this public execution that punishment in Iran would be becoming MORE severe than this as the government seeks to fight back against rising crime rates. I don’t really know what to say about that, as apparently all this guy did was some robbery and adultery. I mean I say ‘all this guy did’ but I don’t think that those crimes are really THAT bad and I don’t really think he deserves to lose 4 fingers for it, although there could be other details I don’t know. He was also sentenced to three years in prison and 99 whip lashes. I don’t know how the hell they’re going to do to make that punishment more severe short of cutting off both his hands or giving him more lashes or more jail time, but I don’t really want to find out, you know?

Here’s a bunch of pictures of the machine and the thief sticking his hand in it that were taken from Iran’s Official Press Agency website. That is just plain weird because that kinda implies that they WANT people to know that they have these machines and are using them even though it must violate about 1000 international human rights laws or something. It’s also really weird that in the pictures the guy doesn’t seem to be screaming or crying or anything and is just standing there taking it, but most news agencies seem to think this was because he was drugged which would make sense again for the same kind of reason as he’s wearing a blindfold. It doesn’t make it any more humane though, just easier for the guards to deal with.

There was one photo I didn’t want to post on the site because its a bit too graphic and sick where you see the guy’s hand come out of the machine and he doesn’t have any fingers left and just a thumb and it’s a bloody stump, but if you want to see it you can do so by clicking HERE. Otherwise just enjoy (?) the ones below and maybe try and do something to stop all this shit going down over there. 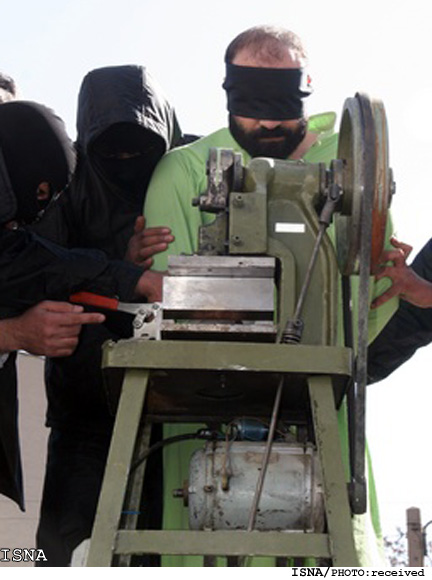 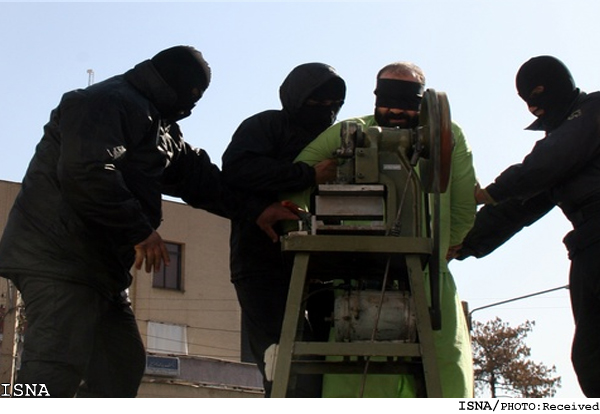 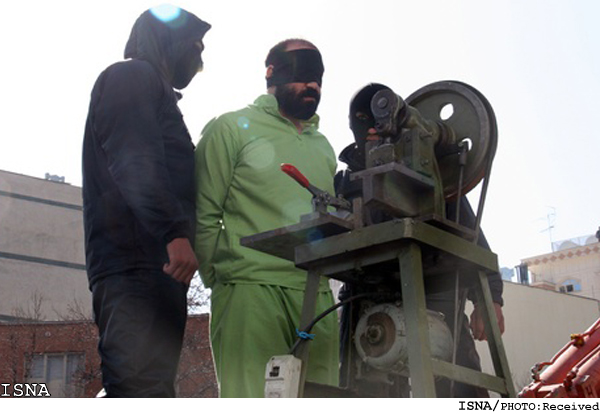 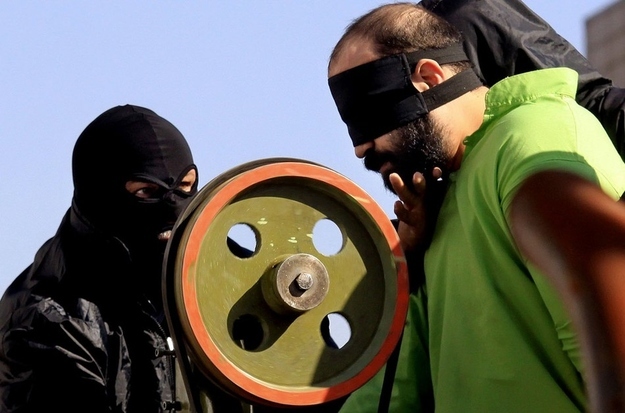 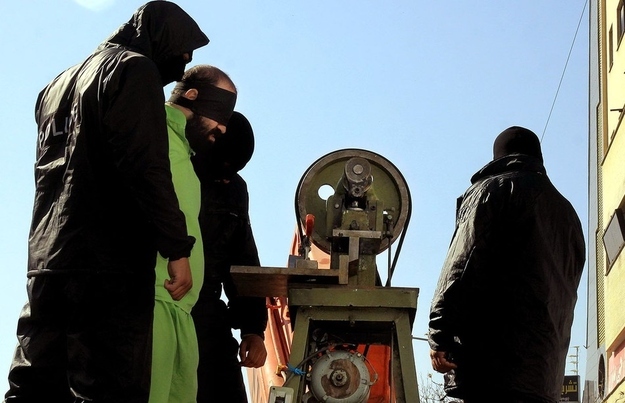 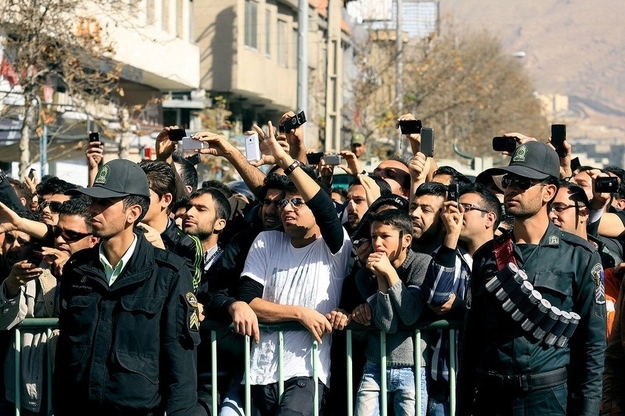 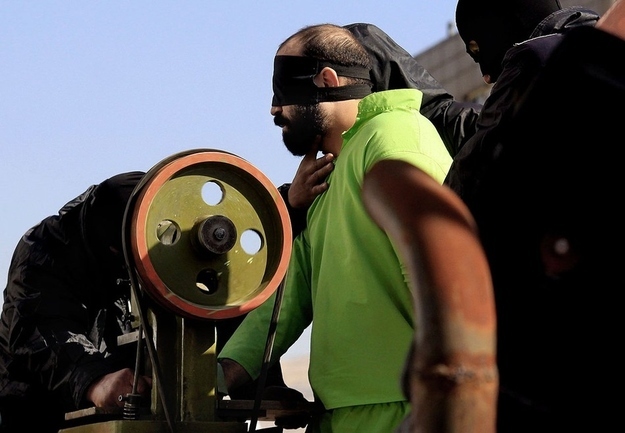 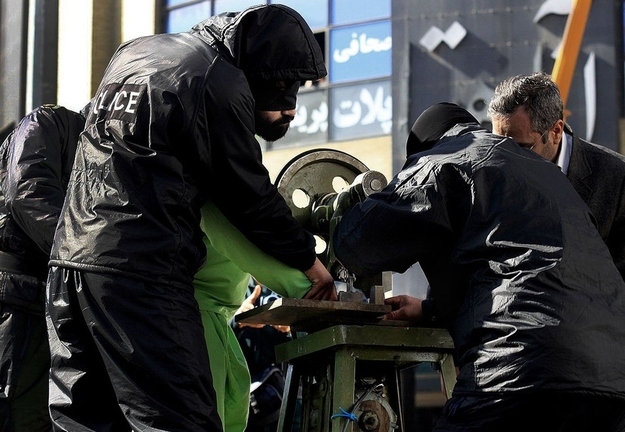