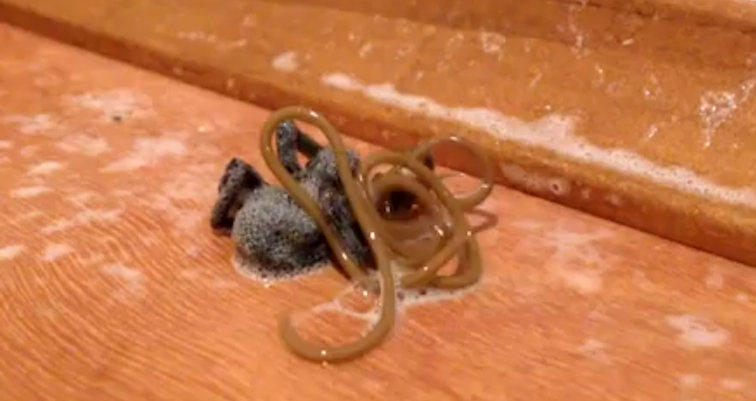 If you don’t like gross stuff then you maybe shouldn’t watch this because it’s probably one of the grossest videos we’ve ever featured on Sick Chirpse. Meh, who are we kidding, we know you’re all gonna watch it, just don’t say we didn’t warn you.

This is a really gross video and probably exactly what you need if you’re still in on a Friday night and tempted to go out, because you know there might be some spiders in your house and they might be growing these really creepy weird alien worms in their stomachs and they might just be ready to hatch and crawl around your house or whatever. This might be positive because you might not have any spiders left in your crappy little house that you can’t even afford to get fumigated, but on the other hand I would be pretty creeped out about it if a bunch of worms that had hatched out of spiders were crawling around my house. But that’s just me, maybe it’s different for you.

You might change your mind after you watch this video though because it is super freaky. It’s filmed by some guy who was filming a skate video (cool) when out of nowhere suddenly this huge spider appeared and started to screw everything up. So the dude – who’s YouTube username is baskwith – immediately got his spray and exterminated it. Not sure what this spray is but wow, does it pack a bunch because that spider was out cold, dead, dead as a doornail. I don’t think baskwith – or anyone – expected a worm to suddenly burrow its way out of the spider’s stomach alien style though. Freaky. It’s probably made even freakier by the fact that baskwith2 (which is kind of surprising because why the hell does somebody already have the username baskwith and why the hell does somebody else want it as well) has soundtracked the video with some awful nu-emo-metalcore track that gets really loud at the end.

â˜› More: This Is The Grossest Picture You Will See Today Or Probably This Month

Baskwith2 describes the event in his own words on the comments of his YouTube clip:

‘ok so i was just editing my latest montage and this huge spider came out, so i sprayed it and killed it, then this fricken alien worm came out of it!!! He also ends the video with a massive WTF Was That’ which is kind of comical and gives away the fact that baskwith is probably a 13 year old kid, if the the fact that he was listening to nu-emo-metalcore hadn’t already done that.

Thankfully, a helpful commenter on YouTube has provided an explanation for the event. This guy goes by the name 2005wais – another awesome name – and said the following:

‘It’s a round worm, it could be found human stomachs and animals its very common usually the egg of the worm is carried by flies and when the fly land on food it will lay that egg and you will be infected, I didn’t know spiders had them but still makes sense cause spiders trap flight flies on there web.

So there you go at least that’s cleared up. Remember not to eat any food over the weekend if a fly has landed on it. Check out the video below and try not to get too freaked out:

Snake That Looks Like Giant Penis Discovered In Brazil