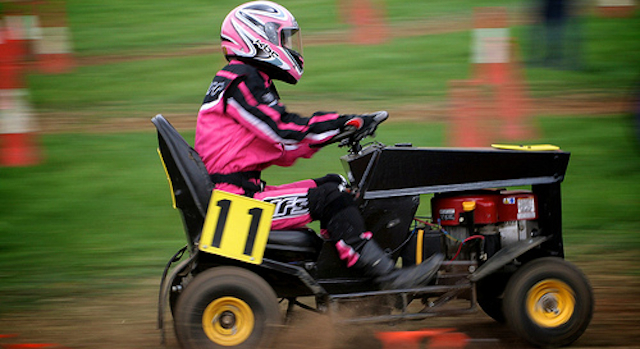 Who knew that lawn mowers had more than one use?

As much as you’d love to spend every weekend partying and getting wasted, sometimes you just have to clean house and mow the lawn. It’s not all mundane cutting and trimming, though; next time you review zero-turn lawn mowers, ask yourself if that mower can handle more than a hedge. Can it handle, say, a hairpin turn?

You might be ready for a sport you never knew existed: extreme lawn mower racing.

Extreme lawn mower racing has existed in America since 1963. It started as a Fourth of July tradition for the Twelve Mile Lions Club in Indiana, and it’s been growing in popularity ever since leading to the formation of Sta-Bil lawn mower racing and the U.S. Lawnmower Racing Association in 1992. They include more than 500 association members across the country and provide more than 20 regional races per season.

As you can see from that, it’s probably way bigger a deal than you initially imagined, right? But what exactly is extreme lawn mower racing exactly? Well basically it’s NASCAR on a lawn mower, which sounds stupid and is but it also completely awesome.  mowers race in seven classes with their blades removed and can go as fast as 50 mph.

It’s not the kind of mowing your dad used to do, that’s for sure. Check out a video of a race here:

In the extreme lawn mower racing circuit, it’s not uncommon for racers to drop $16,000 into souping up their rides and you can even build your own racing lawn mower. Racers typically ride modified riding mowers. In most cases, mower pulleys and belts are modified and a tethered kill switch must be installed to kill the power to the mower immediately in the unfortunate incident of a rider getting thrown from his mower. As you can see it’s a pretty serious sport and the people involved are pretty serious about it. Americans huh, what will they come up with next?

There are four general groups of racing which make the sport even more ridiculous. Group 1 is what is described as “walk behind” rather than “run behind” mowers, with mowers consisting of the basic cylinder mowers and the racers run behind to push them. This definitely sounds like the dumbest category. Why the hell would anyone want to run behind their mower, at least get one you can sit on right?

Group 2 is similar except the mower has a towed seat. Group 3 is the most popular, involving the modified riding mowers, while Group 4 includes lawn tractors that have a bonnet in front of the mounted engine and produce just as fast of a racing experience as Group 3 does.All 3 of these sound way better than Group 1 but I’m guessing Group 4 is where you want to be if you’re serious about this.

Let’s Mow has a complete racing schedule for 2013. I’m tempted to head over there at some point next time in the States to check this out firsthand. Has anyone been or does any know anything about it? Let us know in the comments.