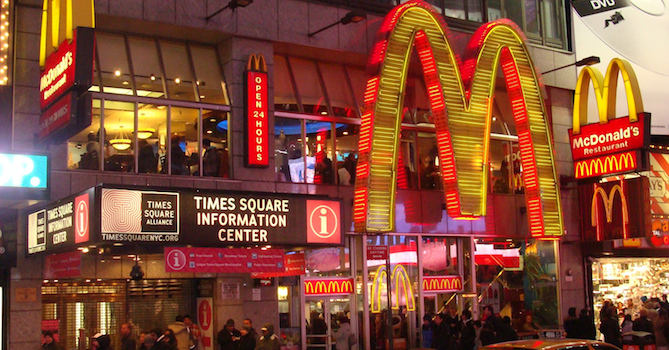 Although it’s no surprise how many McDonalds there are in America, it’s kind of sobering when you see all their locations on one map and realise just how much of the place is covered with fast food restaurants.

Well, this is pretty crazy. Although it’s not altogether all so surprising that there are so many McDonalds in America – I mean most of America is fat and obese and they sure do love their chicken nuggets, just ask Charles Ramsey –  it’s kind of sobering when you see it all on a map. It’s like if you asked somebody what they thought this was a map of they might say something like ‘US towns with a population over 1000’ because the map is THAT extensive. It literally fills up almost the entirety of the United States, except for some of the remote areas in the mid-west. Grim, and considering that McDonalds never ever close down (except that one on Harborne high street – if you know, you know) this map has probably only got more filled in since it was created back in 2009. Oof.

Check it out below, then there’s some more info about it below the actual image: 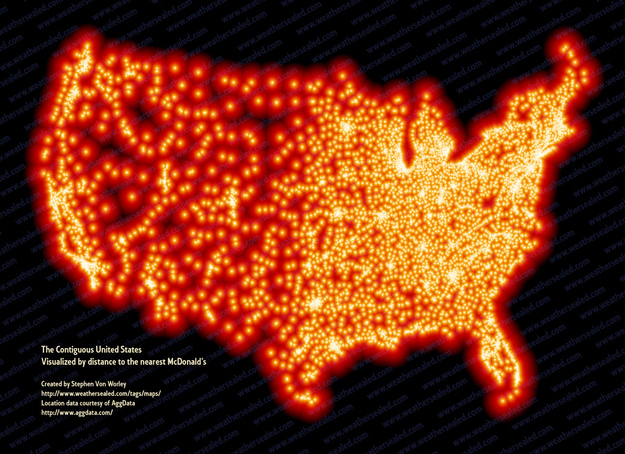 The map itself was the brainchild of scientist and artist Stephen Van Worley, who created it using data he bought from AggData. This isn’t as impressive as if he actually drove around America and found all the McDonalds restaurants himself, but it’s the 21st century so it’s pretty unlikely he was ever going to do that wasn’t it? Would have made a pretty good documentary if he had though.

Van Worley offers a pretty solid explanation of the data including this observation: ‘McDonald’s cluster at the population centers and hug the highway grid. East of the Mississippi, there’s wall-to-wall coverage, except for a handful of meager gaps centered on the Adirondacks, inland Maine, the Everglades, and outlying West Virginia.’ Sounds like he’s every bit the social scientist/geographer. For a full explanation of the data check out Van Worley’s website.

Van Worley also determined what he is calling the ‘McFarthest spot’ – the area of the United States which is furthest away from a McDonalds outlet. It’s somewhere in the middle of the Nevada desert and is roughly 110 miles from the nearest McDonalds, which isn’t even really that far.

For some reason Van Worley decided to visit this spot and he posted up a video of it too, which I’ve included below. It’s a pretty useless video as it’s just him walking around in the desert scrub for a couple of minutes but I thought I’d throw it in for completion’s sake. You can check it out below if you’re so inclined: