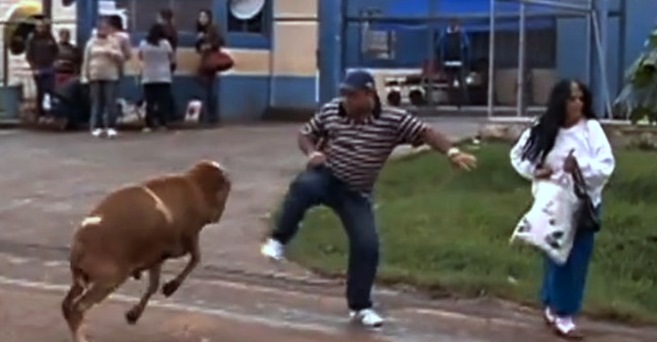 Watch this runaway goat wreak havoc on these villagers in Brazil, head-butting a guy in the nuts and knocking over an old lady.

No wonder Brazil can’t get its economy together. They’ve got bigger things to worry about; like random, senseless attacks from killer goats.

This particular goat is a real misanthropic arsehole. Having escaped from a farm in Londrina, Southern Brazil, it would rather harass every villager in sight than find a safe bush to hide in.

Having terrorised a few peeps already, the goat takes a running charge at an old lady and knocks her over. That’s when one bystander decides enough is enough, and challenges the goat to a duel. The goat promptly batters him, head-butting him in the groin and shrugging off the man’s feeble kick to its ribs, before chasing him round a tree.

Eventually someone grabs the goat and ties it up, and they drag it off somewhere, maybe back to the farm it escaped from but possibly to the glue factory or to a fiery spit as well. At least it went out fighting.