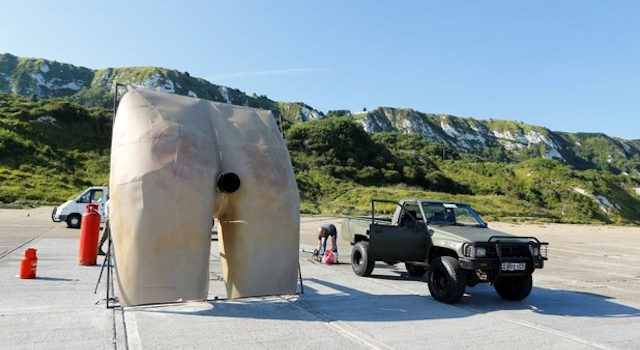 What’s not to love about a bit of good old UK/France rivalry? Some genius has only gone and made a giant arse hole to fart at the French. Colin Furze has a dope as fuck youtube channel where he builds pulse jets and mounts them to bikes and vans and just generally gets his views from making some serious noise.

Apparently a pulse jet sounds a bit like a fart from a distance, so good old Colin has gone and built a massive pulse jet to see if it can be heard from Calais. Is there anything more British than this? I really doubt it.

The guy is a bit of a don with a smouldering iron and has not only made the ridiculous cannon but also a 16ft arse crack out of metal to accompany it. Not just that but he has painted it with specially made paint, scanned with the tone of his ring piece, the best piece of DIY since the Thai Iron Man 3 trailer. Isn’t this is the best thing to happen in 2014?

The event happened on Thursday in Folkestone at around 6pm, and Furze immediately phoned his colleague who was standing in Calais to see if they had heard the fart over there. He confirmed that they had and so history was made. Finally something to make us look good. Not like the British couple caught banging between two parked cars in Magaluf. I’ve never been more proud to be British.

The machine also set on fire once it had let out the fart, which makes the whole story about ten times better.