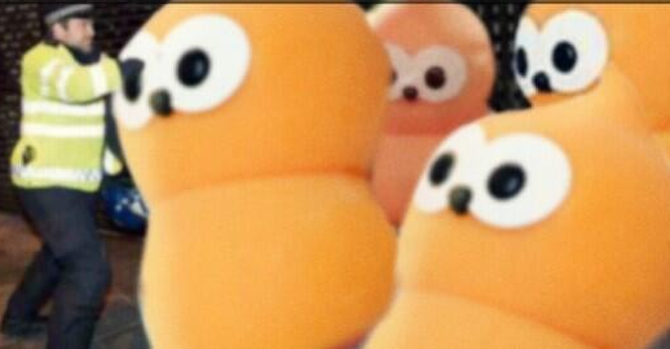 Four people made jokes tweeting EDF instead of EDL, then the EDF Twitter replied to them and now the whole of Twitter has gone crazy thinking that loads of people have confused the EDF and EDL. 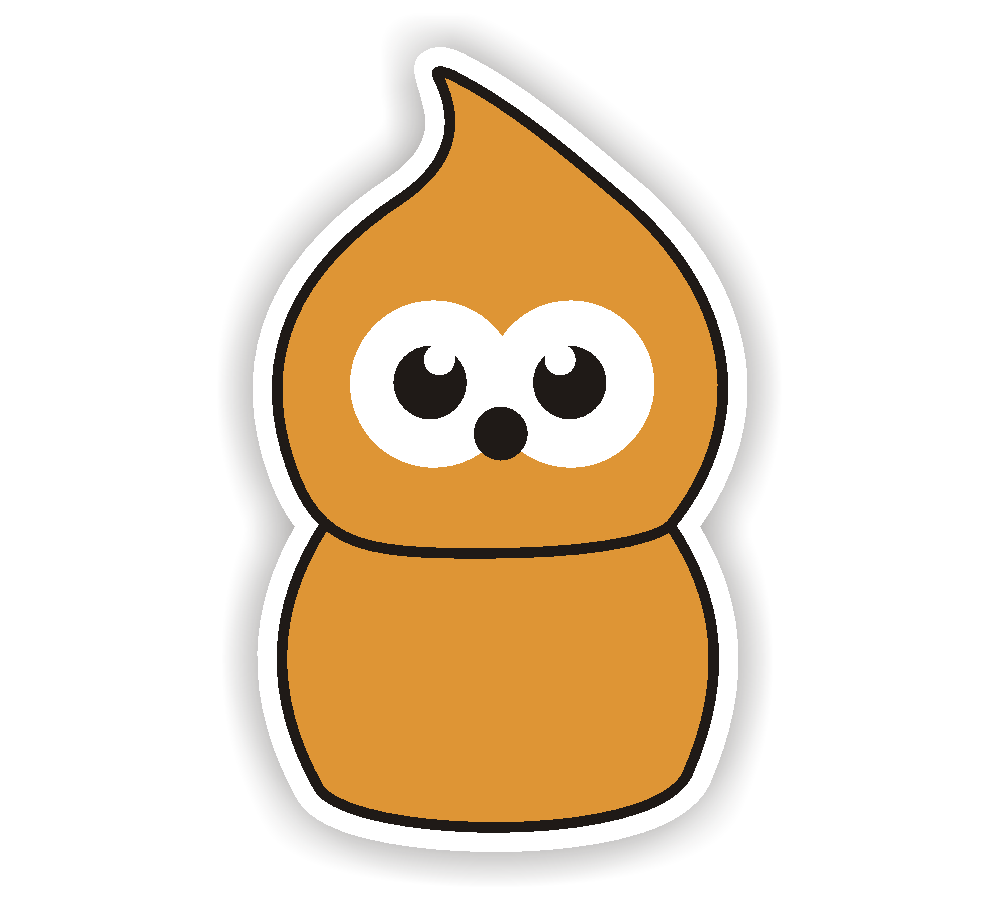 If you’re a Twitter user then you might have noticed that in the past hour or so EDF has started trending alongside EDL. Obviously you probably know that EDL stands for English Defence League and these guys are obviously trending because of all their protests against Muslims and immigrants etc that are going on now and their attempts to get all Muslims/immigrants/anyone who doesn’t agree with them kicked out of the country or gassed or whatever.

You might not know what the EDF is though – they are in fact some kind of energy company but their website doesn’t actually tell me what EDF stands for so I can’t tell you that. It might have done somewhere to be fair just not anywhere that obvious – you know, like the about us section – and I couldn’t be bothered to click through all the pages on a website I wasn’t really interested in. So sue me, it isn’t that important to this story.

Anyway, a bunch of news outlets are reporting that Twitter users are so stupid that they accidentally tweeted the EDF instead of the EDL venting their rage at the EDF demonstrations in Woolwich last night. LOL what noobz huh? Though I don’t doubt that it is possible for people who are anti-EDF to be as stupid as people that actually support the EDF (although this is slightly less believable) this is quite clearly a joke that nobody really picked up on, or some awesome social media work from the guy in charge of the EDF Twitter. I mean EDF has over 8000 Twitter followers (which is more than Sick Chirpse so go follow us now @SickChirpse) so the guy must be doing something right – how the hell could that many people care about an energy company?

But yeah, the only reason that anyone is reporting that people mixed up EDF with EDL is because of the following screenshot: 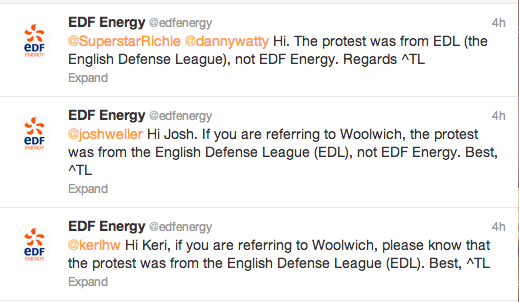 Now, if you bothered to actually click on the Twitter accounts of @kerihw, @joshweller, @SuperstarRichie and @dannywatty, then you would actually see that they’re not all idiots and they were just tweeting the EDF energy account ironically last night. I mean check out all these tweets. I recommend checking out @kerihw and @dannywatty‘s feeds for extra lolz because they really seem to be embracing this as one of the best days of their lives and are pulling out some funny shit.

Although the no fun award goes to @SuperstarRichie who has proved he is anything but a superstar for shunning the limelight and deleting all his tweets and all the people he’s following and posting one of the lamest messages in history:

OK so maybe Josh Weller’s could slightly be interpreted as being stupid, but it seems like he’s kind of a funny guy with his response so I’ll go with it. Anyway, it seems quite clear that these guys were joking and not actually stupid, so it seems like all the trolls on the internet got completely trolled by the EDF, who also got kinda trolled themselves as a result of it. And then all the newspapers who reported it also got trolled. Not really sure who comes out of the winner in this to be honest. Or maybe the EDF guy (or gal, sure) is really clever at social media and knew if they replied then they would get trolled hard and get a shitload of publicity. I guess we’ll never really be sure. In any case, someone definitely got trolled.

I know when you search @edfenergy on Twitter it’s not the most useful way to look at how many people @mentioned someone on Twitter because they never all come up, but if you do that you’ll notice that there aren’t exactly loads of people abusing @edfenergy or even mentioning them before they started replying to people, so whatever happens or why it happens they’re probably the winners because there’s no such thing as bad publicity and they have got a shitload today.

â˜› More Bad Publicitiy: Mountain Dew Release The Most Racist Advert Of All Time Directed By Tyler The Creator 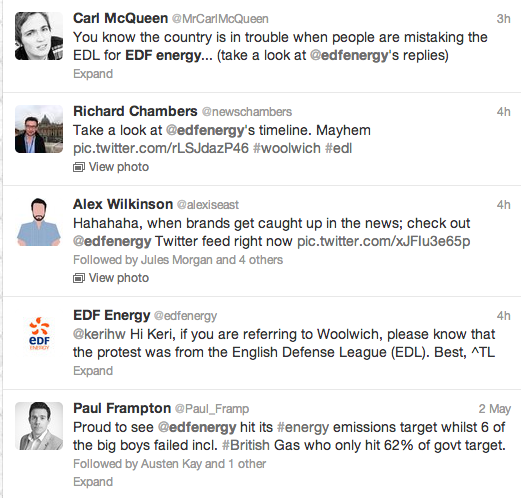 In fact it doesn’t look like anything has really happened on their timeline since May 2nd. Yeah, I know the original ‘abusive’ tweets from last night weren’t included but I’m sure if there had been so many abusive ones aimed at them then at least ONE would have shown up, considering how many are showing up right now about how stupid people are for confusing the two. If you’re featured here then congratulations – it is in fact YOU who are the idiot and not the four people who made a joke about EDF/EDL and how they are similar. Nice one idiots.

Of course, there are also  a bunch of people who realised after about one minute (like me) that the original tweeters were joking, so props to them. I’m not gonna include any screenshots of them though because they’re not funny. Here are all the dumbasses who think they’re really smart though: 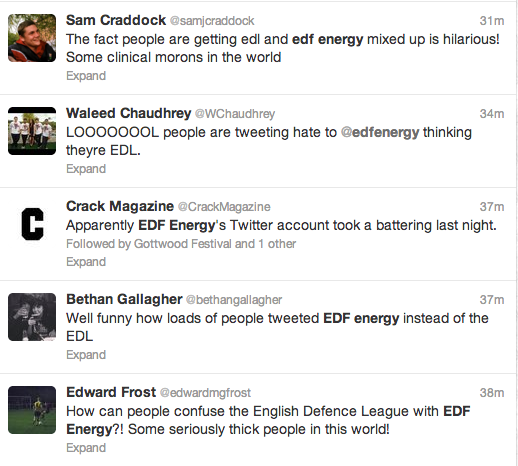 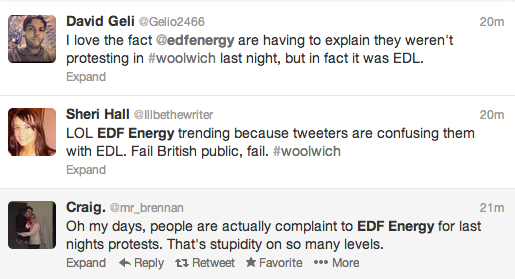 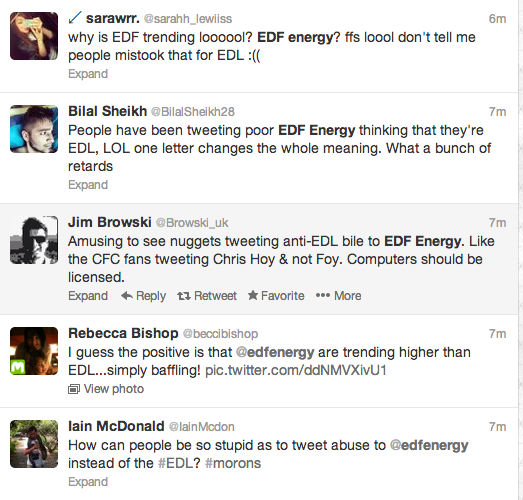 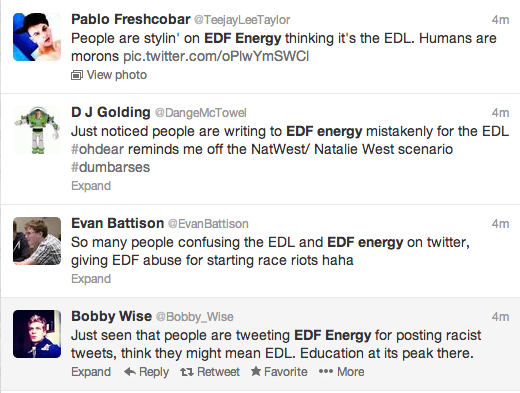 ETC ETC ETC FOREVER AND EVER X INFINITY. Don’t worry though, it seems like the Daily Mirror can also be classified in that bracket too, and probably a bunch of other high class journalistic publications. Remember, you heard it on Sick Chirpse first. 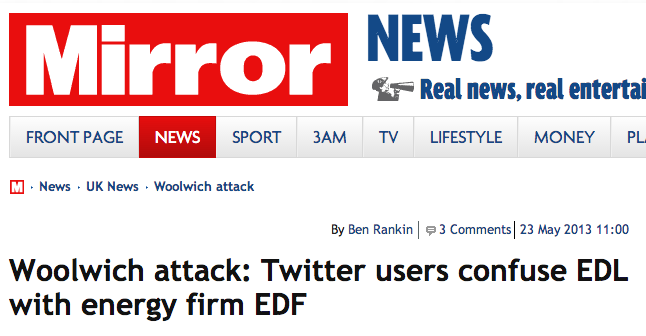 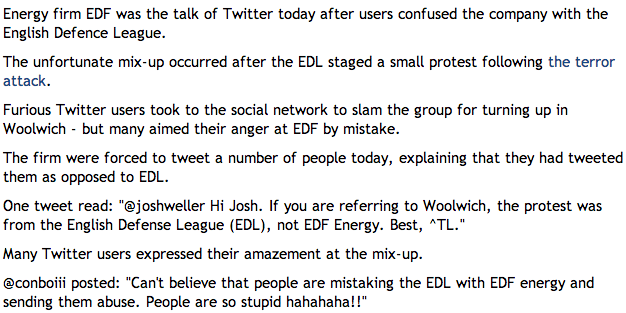