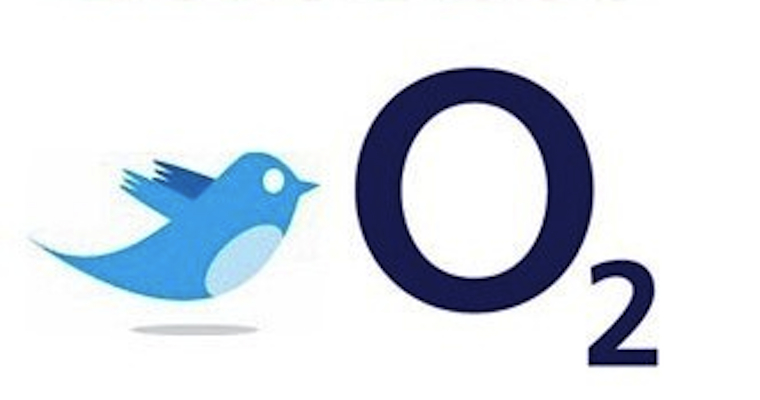 O2’s customer service and interaction is well known for being highly responsive and also pretty hilarious at times. But have they gone too far with these latest tweets which I’m sure many people may regard as racist?

A few months ago we posted an article about how O2’s customer service was really jokes because of some of the tweets they were writing at that time. You can check out that article again HERE but if you want a short summary of it basically the whole O2 network went down for a couple of hours one day and people were sending their twitter account abuse, you know tweets like ‘fvck you O2, suck my dick in hell.’ Anyway, instead of replying with similar abuse or ignoring it the guy in charge of their twitter account simply replied with some offhand comment like ‘maybe later, got some tweets to reply to right now’ which is pretty LOLZ when you think that it’s coming from the twitter of a major corporation which is more likely to just ignore it or report it to the police or something stupid like that. People seemed to really like it anyway and it blew up all over the internet. Maybe some people even switched mobile phone networks to O2 because of it, I don’t know.

â˜› More: Think this is racist? Check out the most racist incident in game show history.

Anyway I don’t follow the O2 twitter but I’m aware their customer service team is pretty responsive and sometimes pretty funny (mainly because of that Sick Chirpse article), but they may have overstepped the mark this time, especially if the Daily Mail or a stupid publication like that gets a hold of these latest tweets. Most other people will probably just think they’re pretty funny, including the people who were sent them. Basically, O2 just talked back to some rudeboys in a kind of Batman_LDN rudeboy style to people that were asking them rudeboy questions. Obviously this is just a bit of jokes and helps differentiate O2 from all the other nameless/faceless corporations out there but I can easily see some old crusty guy who doesn’t understand twitter or young people/youth culture going crazy about it and someone losing their job, purely because misdemeanours and misunderstandings on twitter seem to be the main way that people lose their jobs these days. Hopefully it will be recognised at the light hearted banter that it is though.

Anyway check out these tweets below and have a laugh at them hopefully. Or find them horrifically offensive and change your mobile phone provider: 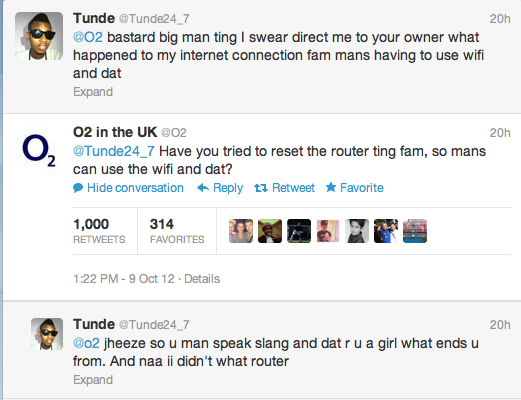 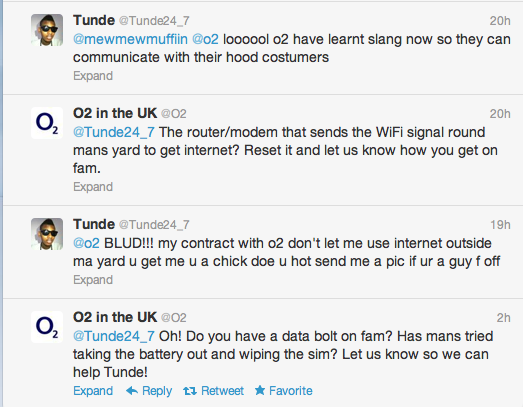 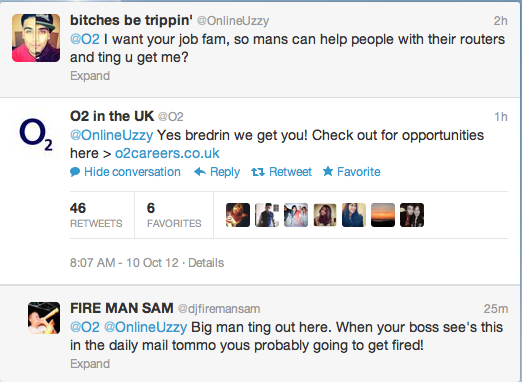