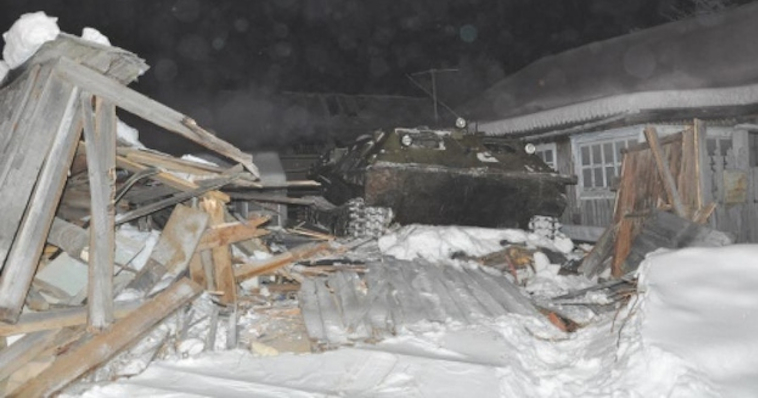 Having a tank drive through the wall of your house in the middle of the night is probably one of the worst things I think that could happen to anyone. But yeah it happened and yeah you’re right, it was in Russia and the guy driving the tank was drunk.

I remember one time when I was a kid and I was getting a ride to the station with my dad and on the corner of the road where the station was there was this little house with a brick wall around its’ garden that kinda went up to your waist and this car had veered off the road and driven straight through it, screwing it up completely and then crashing into the house too. I was like ‘man, I’m glad I didn’t live in that house.’

Well those guys might have had some problems but it ain’t nothing on these guys because some Russian guy got really wasted and drove a friggin’ tank through their house. You know you’re gonna be pretty damn pissed off if you wake up in the middle of the night and there’s a tank coming through the wall of your house, you know?  It all went down in the village called Beryozovo in the Ural Mountains – where I doubt anything interesting has ever happened ever prior to this – on Friday morning at around 3:00am when some bitch phoned up the police and reported that a tank had driven through her house and also taken out part of her neighbour’s fence and garage. Whoopsie.

â˜› Check This One Out – Drunk Russian Guy Destroys Kitchen

The cops showed up at the scene and were quick to point out the woman’s mistake – that the vehicle was not actually a tank but a 14 ton all terrain vehicle. I bet that woman felt so stupid getting those two mixed up, huh? Apparently she wasn’t the only one though as some 80 year old guy in the area was so convinced he announced that a war had broken out. Bearing in mind that this guy lives in some crappy little village in the Ural Mountains and is 80 years old he was probably already crazy though.

It turned out that the driver was completely wasted – is there any other way to be if you’re Russian? – and they couldn’t ask him what the hell was going on until the morning after because he was completely incomprehensible.  When he came to in a police cell he was really surprised that he was in Beryozovo and had no idea how that happened, which seems to be the classic excuse in Russia whenever anyone screws something up and it goes embarrassingly wrong for everyone involved. The driver is gonna have to face misdemeanour charges, could possibly lose his driving licence and has to pay up for the damage caused to the house. Ouch. If the vehicle was stolen (which somehow wasn’t clear at this point?) then he could also end up in jail. I bet he’s regretting drinking all that vodka and driving a tank/all terrain vehicle all the way up the Ural mountains now huh? But then what the hell else are you gonna do on a Thursday night in Russia?