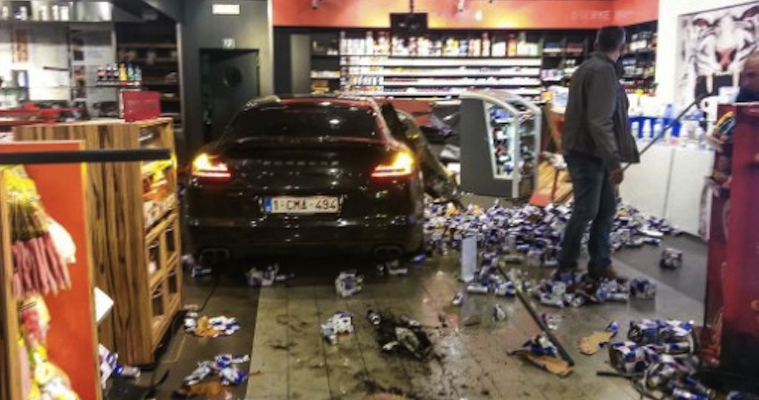 If you’re an international footballer how do you celebrate a rare weekend off? If you’re Jonathan Leagar, you get on the sauce and crash your porsche into a petrol station clearly.

I have never heard of the Belgian international midfielder Jonathan Legear before and my football knowledge is fairly decent so I’m going to assume he isn’t THAT big a name. That is until now as he’s cemented himself alongside the likes of Jermaine Pennant and paul Gascoigne for their ridiculous drunk driving stories which will be talked about for years to come.

It turns out Jonathan Legear used to play for Anderlecht and got transferred to Russian club Terek Grozny last summer. I dunno how he’s doing there but I assume he must be fairly decent, at least I hope he’s better at football than he is at driving. Legear was back in Belgium after being given the weekend off by his Russian employers, I guess because it’s an international break and he wasn’t picked for Belgium (I guess he’s a fringe player which is why I haven’t heard of him, and if you play in the same position as Eden Hazard you probably aren’t going to get into the national team, right?) and on Sunday morning at around 5:30 whilst ‘slightly inebriated’ he drove his Porsche straight through a petrol station. That’s right. The video below is pretty crazy and looks like the end of a chase in Fast and Furious or something like that where one of the cars crashes into a store. You get it from a few angles too so it’s well worth checking out.

Apparently Jonathan Legear mistook the break for the accelerator but if you check out the CCTV footage below there is just no way that is possible because he fvcking floors it quite a distance from the pumps into the petrol station itself and keeps going once he gets into the petrol station too. And when he drives up to the pump it doesn’t look like he’s going to stop either, it kinda looks from the way he’s driving the car that he’s just really wasted and thinks it’ll be really funny to drive through the petrol station. Which in fairness it is, but probably not so funny for him now or his career.

Fortunately only one person was slightly injured in the incident, although the petrol station was completely wiped out with a spokesman estimating that 250,000 – 300,000 euros worth of damage had been caused to the petrol station. Ouch. Jonathan Legear himself has been banned from driving for two weeks (big punishment) and might be charged with involuntary assault and intoxication. Again, as is the case with most footballers it’s great to see the punishment fitting the crime appropriately!

Check out the crazy footage below in these two videos and remember the name of Jonathan Legear in case he comes on for Belgium next time you happen to be watching them play and you can bang out that little factoid and everyone will be buzzing off it and think you’re really cool because of your niche football knowledge:

More Dumb Footballers: Raheem Sterling And Giovanni Simeone Get The Stupidest Hairstyles Of All Time