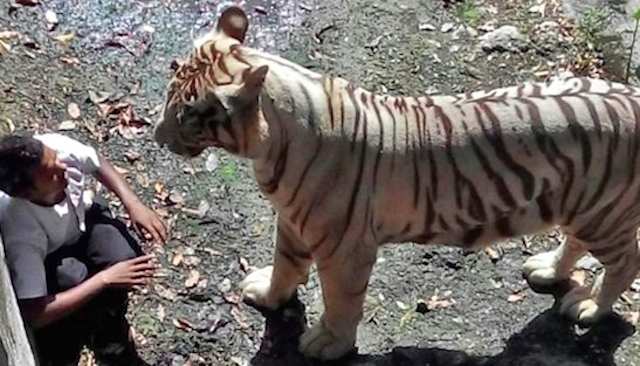 Tiger enclosures should be avoided when under the influence of alcohol.

Pretty distressing footage here all the way from India, and a timely reminder that it’s never a good idea to mess with tigers because they can well and truly mess you up.

This drunk guy in India who is locally known as Maqsood basically tried to do what this Chinese dude did in February and offer himself as tiger food by jumping into a cage in the New Delhi Zoo despite repeated warnings and physical coercion from zoo officials.

Once in the enclosure, the tiger sized him up closely for 15 minutes before going in for the kill and mauling Maqsood before dragging him off to a more private area of the cage to finish him off. It eventually killed him and Maqsood was taken to the morgue.

The footage is pretty grim and upsetting so if you’re not feeling so good then don’t watch the video. It’s probably not as grim as this woman who was mauled by a drugged up chimpanzee and lived to tell the tale though – unfortunately she will never ever look the same ever again. Don’t click on that link either if you want to keep your lunch in your stomach.

Basically don’t mess with animals that are way tougher and more dangerous than you under any circumstances.