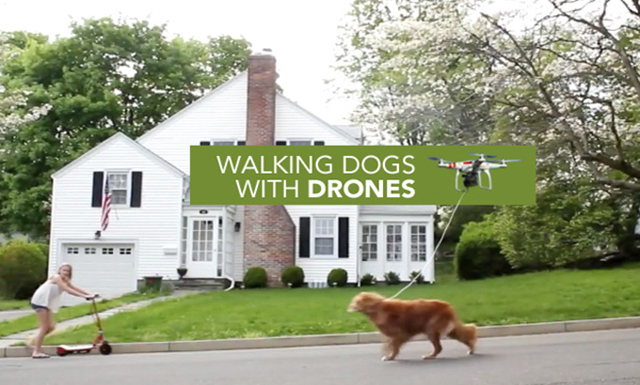 Walking the dog is about to get a whole lot easier with dog-walking drones – is this another step into a robot future for humanity?

New York-based videographer Jeff Myers used a drone to walk his golden retriever by programming the device with the walking route and then attaching his dog’s leash to the drone. He actually directed the drone using his phone but in future the idea is that drones will be able to walk dogs unassisted, with a built-in camera to make sure they don’t run into any trouble along the way. It seems to have worked pretty well which begs the question — is this the future of dog-walking?

Usually we’ll read or watch something about drones and get excited for what the future holds technology-wise but if it gets to the point where we’re actually using flying drones to walk dogs then it is officially over for society. Spending time with/walking your dog is one of the sweetest pasttimes a human can do, and now we’re passing over that responsibility to the robots. I don’t want to be the one to cause mass panic but we’re basically heading towards a robot takeover and by the time it all happens Will Smith isn’t going to be around to save us. So we’re pretty much fucked.

But then you’ve also got to consider what happens when the dog spots a squirrel and runs after it? Pretty sure your dog will end up back home dragging a malfunctioning, lifeless drone behind it. Also how is a drone going to pick up dog shit? People are already pretty bad at cleaning up their dog’s mess, how are they going to get a robot to do it?

Lots of creases to iron out before dog-walking drones become reality but you have to admit, whether it all works or not it doesn’t look good for humanity either way.