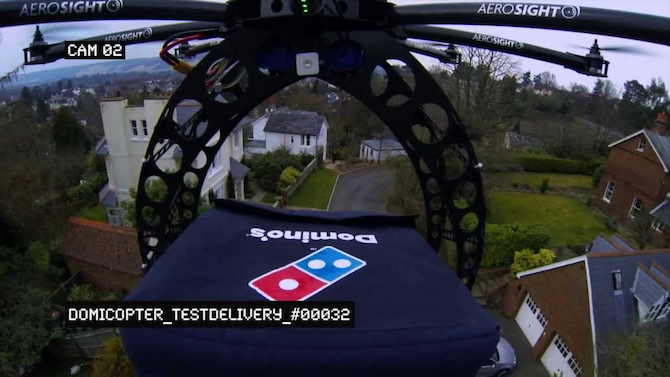 Domino’s have launched a revolutionary new way to deliver your pizza: the Domicopter. It’s a remote controlled drone that delivers your pizza right to your door.

This is pretty awesome and could be the next step in ordering takeout food, although I’m not sure if it’s likely to take off and replace students and immigrants delivering pizza on motorbikes anytime soon but it would be pretty cool if it did.

Basically the Domicopter is a really original name for a new remote controlled helicopter that will deliver you your pizza. From Domino’s, obviously. It also has the especially cringeworthy tagline of ‘taking your delivery to new heights’ which I’m sure they paid some outside marketing company millions to come up with.

Domino’s have uploaded a video below of a Domicopter test run to prove that it really works and I’ve gotta say it does look pretty impressive, although the design of the Domicopter itself is a bit weird and kinda looks like some future robot death wheel from some bad  (good) 80’s movie like Mad Max or The Running Man.

I’m not so sure if that’s a bad thing or a good thing about it though. I think I like it but it might put some people off who are pussies and scared of crap like that. I would also expect it to incorporate the traditional Domino’s blue red and white colours a bit more, so when you’re looking at the sky you would instantly associate the weird drone like contraption flying through the air with someone ordering a Domino’s and maybe order one yourself or something.

I think the control of the Domicopter is a bit weird though. I mean I’m sure the guy in the Domino’s control centre has a camera attached to it and a GPS or something to tell it which way to go, it would just be a bit mental when the pizza lover (that’s who they always address Domino’s menus to when they send them to your house) has to get the pizzas out of the drone and it’s just kinda hovering there looking at you while you get it out.

Even if you’re not scared of robots I imagine that might be kind of threatening for people as it just hovers there with those scary rotors twirling round as you slowly grab the pizzas. The guy in this test video even looks kinda scared. Still, I guess this is the first time this has ever been done. In 10 years I’ll probably look back and read this article and think I was a fucking idiot for thinking something like that though.

In Japan You Can Order A Mayonnaise Pizza

Pizza Hut Middle East Knows How To Make A Pizza