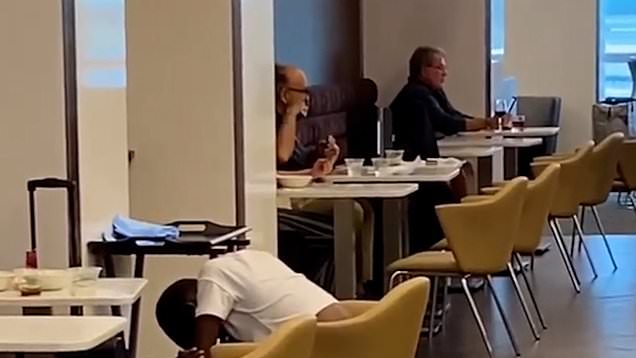 What a disgusting human being.

I don’t think anyone came out worse from the final days of Donald Trump’s administration than former New York mayor Rudy Giuliani, who vehemently defended the former President’s claims that the election was rigged and ended up getting pretty much shafted when things didn’t go according to plan whatsoever.

Anyway, not only has Donald Trump hung him out to dry and refused to even pay Giuliani for his work, but the guy looks to have fallen on even harder times now as he was just filmed shaving his beard off at a table at an airport restaurant, even though there was a luxury bathroom just a few feet away. You know when someone is at rock bottom when they don’t even care about doing something like that.

The video was originally shared by a guy named Derek Weiss, but Michael Rappaport – he was that weird cop that Phoebe dated in ‘Friends’ for a bit once – put it on his personal Instagram so everyone could see what a disgusting lowlife Giuliani now was and how far he had fallen. It really is grim:

Wow. Tell us how you really feel there hey Derek. Don’t hold back at all.

Funniest/grossest part is probably how someone looks like they’re actually sitting on the table next to Giuliani and having to put up with that next to him whilst he’s eating his breakfast or whatever. Not what anyone wants to see and completely unfathomable why Giuliani just didn’t just go into the bathroom to do it?! Guy is a fucking gross loser and I hope he ends up in jail.

For more of the same, check out this drunk Karen who Giuliani used as his star witness in Trump’s case. So embarrassing.