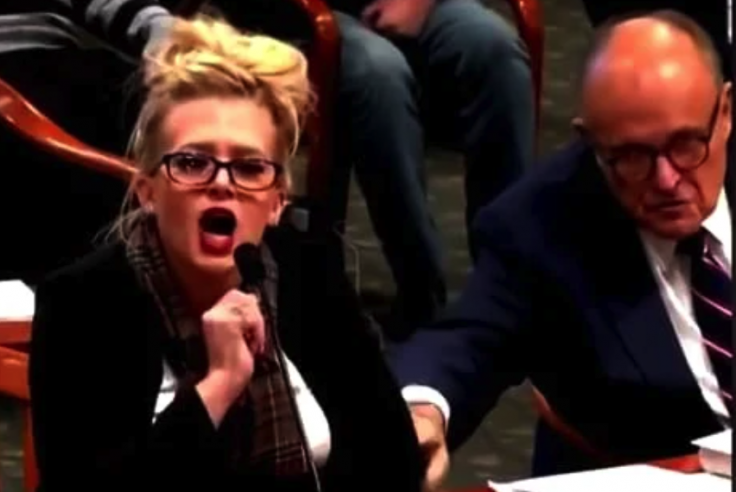 Clip of the year.

Donald Trump might have decided that he will allow Joe Biden to move into the White House come January, but I don’t think he’s ever going to stop contesting the election results and claiming that it was fraudulent.

In fact, there are still hearings going on in some of the states that have been accused of vote tampering and this is where this latest clip that’s gone viral has come from. The tweeter is alleging that the woman in the video is drunk and when you watch it you’ll see why they think that this is the case. She’s literally the living embodiment of a wasted Karen that’s talking absolute dross about nothing when she hasn’t got her way about something and going on and on and on about minuscule details that nobody cares about in the slightest that aren’t even relevant to the outlandish claims that’s she making.

It’s almost like her whole life has been leading up to this moment:

Could’ve sworn I knew her from every retail gig I worked. pic.twitter.com/5WAzVMdYQi

Holy smokes the sequel is even better!

Rudy Giuliani tries to shush her to calm her down and the Republican even tries to reel her in!

She treats this Republican* like he’s a Chick-fil-A employee and the milkshake machine went down.

“I can’t even get an actual job anymore,” says Mellissa Carone. She says she was laid off from Ford before she was hired by a staffing agency to do temp IT work, now claims that Democrats are the reason she hasn’t been hired in the past four weeks. pic.twitter.com/M1j9ecldIM

Honestly the only note I’d have for this SNL sketch is that they should’ve had @DrPhilGoff sitting beside her for it. pic.twitter.com/mNTQfKwoOR

Ok, so she does honestly seem like she’s really drunk there – slurring her words, interrupting, being belligerent and constantly repeating herself and just going on and – doesn’t she? That comment and the clever editing is no doubt why the clips have gone viral, but in fairness to this woman, I feel like I should post the full clip here and view it myself as well to give her the benefit of the doubt.

It’s thirty minutes long and I’ve watched it all and it is a bit of a slog, but I can’t tell if she’s drunk or if it’s just the way she talks/acts. I can tell that she’s a complete and utter idiot though. She’s constantly slurring her words and forgetting stuff and repeating herself, but she’s also spouting out a lot of information about the alleged voter fraud that she witnessed, so you can perhaps forgive her for that in lieu of what she’s saying and how long she’s talking. That is me being really nice about the situation though because if she isn’t drunk, then the reality of the situation is that she would be one of the most annoying and awful people that you could ever interact with.

Yeah, OK, you can’t even really argue that the thing was cruelly edited after watching all of that. It’s like a car crash that just gets worse and worse and worse. It’s just like why are you saying all this stuff about the FBI and her neighbour and the Chinese? And how can she even count to 30,000?

You’ve almost gotta feel for the Republicans that are still pursuing these election fraud legal cases when these are the best witnesses that they can offer. You really have to question how Giuliani and the Republicans have trained her for this hearing if she’s being allowed to talk for so long about absolutely nothing and constantly go off on tangents about stuff that’s not even related to voter fraud. Isn’t it obvious that she was going to memed to oblivion and get compared to a drunk girl at a party that you somehow ended up talking to and is off on a soliloquy and you can’t get away from?

For more of the same, check out this other star witness who is also a sex offender. Rudy Giuliani really can pick them can’t he?