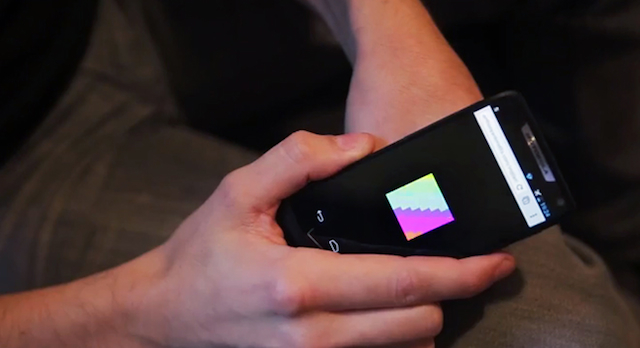 Never had the guts to get a real tattoo? Don’t worry because now you can get a digital one that is only viewable with a smartphone. Good or bad idea?

I dunno if this is a really cool idea or a really lame idea. On one hand, you’ve got a tattoo but you don’t actually have a tattoo because someone has to use their smartphone to see it and that might be kind of useful for some people, but on the other hand if you want a tattoo you should probably just man up and get one and not be afraid of the consequences. So I think after that short brain process I’ve decided it’s probably a pretty lame idea. Still, it’s kinda funny and almost cool so definitely worth talking about on here.

Basically artist Anthony Antonellis implanted an RFID chip into his hand that can generate a GIF that is only viewable by a smartphone. Crazy huh? You can install different images or text files onto the chip but they have to be less than 1KB large because the chip (at this point in time) is only as big as a grain of rice. Of course, it seems likely though that in the future people might get larger chips so maybe you could see a whole digital chestpiece or back piece or something.

Right now though we’ve just got the hand. Is this the future of tattoos or just a lame fad? I’m going for the second option there but hey, this is the future right? You never know.

The Best And Worst Text Tattoos

The Boy With The Lightning Tattoo