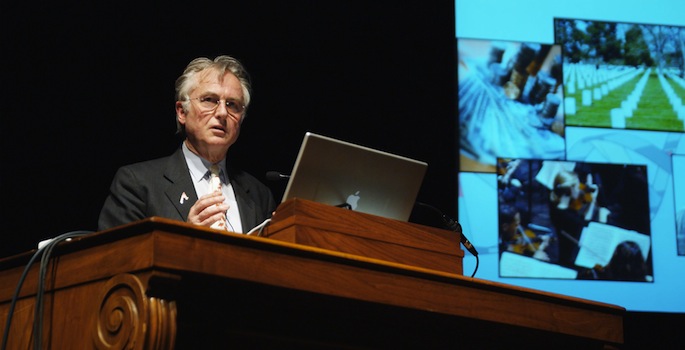 The world’s most famous atheist manages to upset a lot of people in very little time with some poorly-expressed views on Islam.

On Friday, digital self-righteousness went positively stratospheric as famed atheist, distinguished academic and professional grump “Rowdy” Richard Dawkins decided to bitch-slap yet another religion via his Twitter account. Dick (we feel we can call him that) regularly takes pot shots at the religiously-inclined using 140 characters or more but this time he really outdid himself by pointing out what he perceived as the shortcomings of the entire planet’s Islamic community in the field of science;

All the world's Muslims have fewer Nobel Prizes than Trinity College, Cambridge. They did great things in the Middle Ages, though.

Understandably, the Twittersphere didn’t take too kindly to such comments and it all kicked off. An online shitstorm ensued, with Dawkins trending worldwide while impassioned Tweets flew back and forth like arrows on a medieval battle field. Dawkinites were torn between an embarrassed silence and the need to rush to his defence because of, y’know, atheism and stuff?

Dawkins, never one to shy away from a verbal scrap, showed no signs of backing down and upped the ante. Take this, bitches!

Muslims aren't a race. What they have in common is a religion. Rather than Trinity, would you prefer the comparison with Jews? Google it.

Shovel firmly in hand, he dug even further by establishing just why he felt the need to single out Muslims for a good theoretical kicking;

Why mention Muslim Nobels rather than any other group? Because we so often hear boasts about (a) their total numbers and (b) their science.

Now I’m not sure exactly what boasting he’s referring to. I haven’t seen anyone on the news recently declaring any pro-Islam scientific superiority but who knows? I don’t read every scientific journal and I got Pikmin 3 on Monday so that’s been taking up a lot of my spare time. Clearly Dawkins doesn’t like anyone boasting unless it involves, say, Trinity College Cambridge, in which case that’s fine.

Trinity College Cambridge has more Nobel Prizes than any country in the world except USA, Britain, Germany & France. Remarkable fact.